Poor Deceleration Can Tear Your Labrum and Your UCL

When I graduated from high school, I can honestly say that I probably hadn’t completely read more than 30 books in my entire lifetime.
And the only thing that got me even close to that

number was the phase I went through in the 6th and 7th grade when I read every baseball biography and every volume of the Encyclopedia Brown series in our school library.
The reason I didn’t read much?
Nothing interested me.
But now things are very different.
Call me a nerd if you want, but now I read alot……
A whole lot.
And I only read things that interest me.
Mindset books.
Pitching articles.
Hitting articles
Physical Therapy/Orthopedic Journals
I read nearly all the stuff written by other pitching instructors with websites and blogs–even the the guys who differ from me philosophically.
The fact is, with every book, post, or article I’ve read, even if I thought it was poorly written or way off base, I have ALWAYS learned something.
One thing that kind of bugs me a little about many of the internet bloggers, is that they sometimes seem to be writing to one another.
Sort of one-upping each other and trying to come off like the smartest guy in the room.
Sometimes they lash out at each other with unnecessary vitriol. I must admit, from an entertainment standpoint, once in a while it’s amusing when a pitching guru cat fight breaks out. But other times I have a more visceral response and view the disagreements as sort of juvenile.
Listen, I’m no expert. I certainly don’t have all the answers, but neither does anyone else (no matter what they might claim).
Speaking of that, my good friend Coach Ron Wolforth of The Texas Baseball Ranch has taken a lot of heat on the web lately for his stance that efficient deceleration is a critical part of arm health and ability development.
The argument is that deceleration is natural and need not be taught because “EVERYONE” does it correctly. To teach deceleration is a waste of time, and according to one self-proclaimed judge and jurist, “If your pitching coach is working on deceleration, you should fire him.”
I agree that many pitchers’ deceleration patterns are naturally efficient, and need not be worked on at all.
But let me tell you, I have done thousands of pitcher evaluations. Each one has included a front view high speed video analysis of the deceleration phase, and sometimes guys just aren’t very good at it. Their arm never pronates at the forearm and it doesn’t efficiently internally rotate at the shoulder. The arm is thrust forward into full distraction from the shoulder and the elbow bangs violently into full extension. Often these guys finish in a classic fielder’s position and their elbow crosses the midline of their body causing a ballistic bang on the posterior shoulder.
(As an aside, when I interview my least efficient decelerators they often tell me they have spent a lot of time with pitching coaches doing towel drills and trying to get their arm extended at release.)
I consider these guys outstanding decelerators. 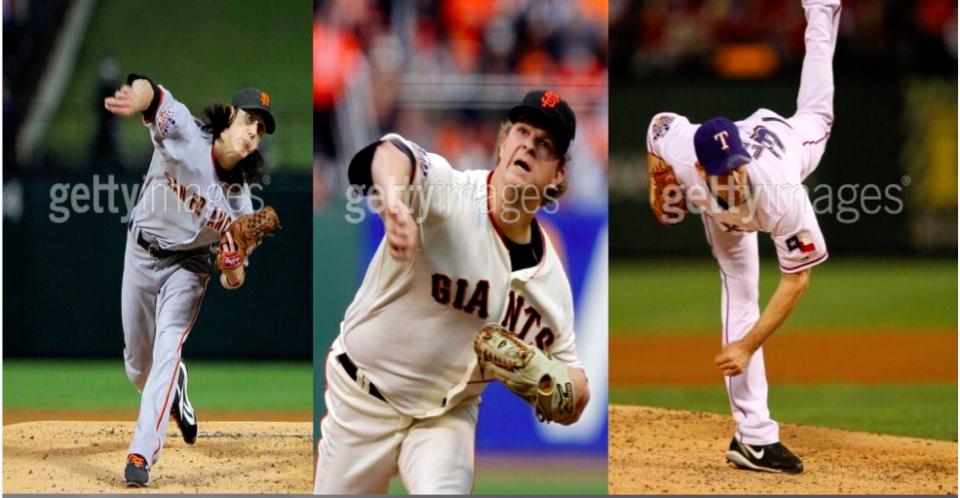 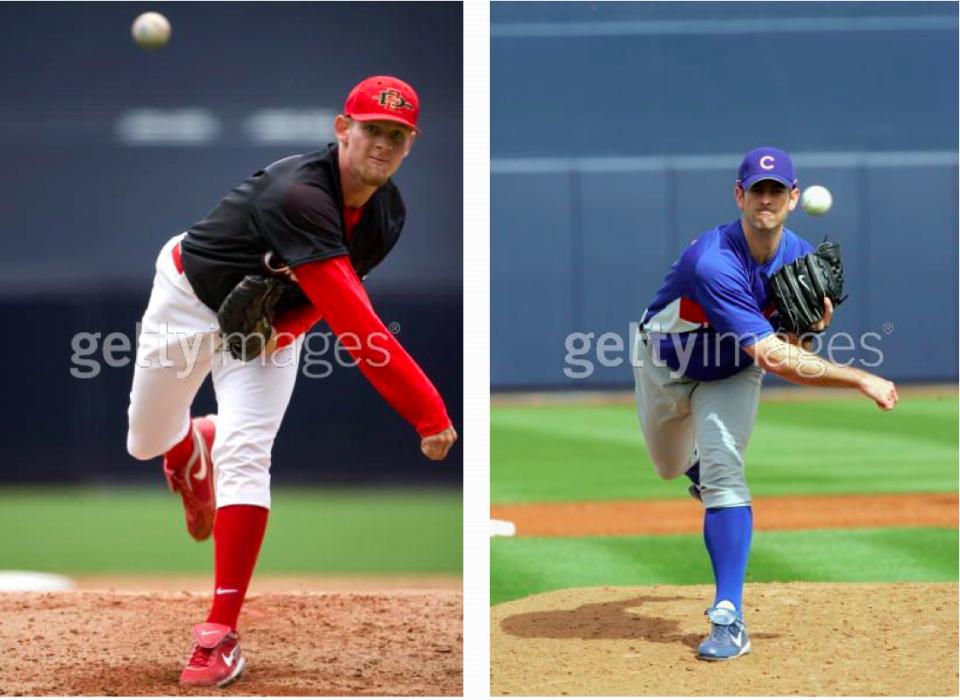 So last night I was reading a few journal articles, looking for some data that might explain a few complicated pitcher rehab cases I am currently working.

t of you know I recently published two video products called Mechanical and Physical Contributors to Arm Pain, in which I presented the idea that the location of the pain can tell you where to look on video analysis and hands-on examination for any constraints that might be contributing to pain, or putting the pitcher at risk for injury.
But just like in my medical practice, nothing is ever absolute. The presentation of symptoms is never perfectly clean.
In physical therapy,  when you assess a patient with an injury or illness, you have a list of signs and symptoms that usually add up to the appropriate diagnosis. For example, if you examine a patient who has recently had surgery on a lower limb, and he complains of pain in the calf,  you have to rule  the possibility of a blood clot. So you check for all the classic signs and symptoms–red, hot, swollen, tender to touch, pain with passive ankle dorsiflexion and a positive Homan’s sign.
That’s what the “book” says you will see.
But in reality, you might only find one or two of those signs, or there might be other symptoms present as well. It makes the picture a little more cloudy than the textbooks paint it. When that happens, you have to make a judgement based on what one of my very first PT school instructors used to call your “index of suspicion.”
Then you begin treatment and reassess constantly to make sure you’re on the right track.

The one thing these guys have in common is that they are both very inefficient  decelerators. When I look at their video from the front view, neither guy pronates this  forearm or internally rotates his shoulder immediately after ball launch. Instead their arms fully extend at the moment they let go of the ball.  Neither continues rotating around the front hip or keeps the elbow loose and bent. Both of guys’ elbows cross their midline and their shoulders bang posteriorly at the end of the movement causing a violent rebound as their arm is vaulted into the air.

But here’s my dilemma.

Typically, inefficient deceleration is a contributor to POSTERIOR, shoulder pain.
These guys are complaining of ANTERIOR pain.
That muddies the water.
So last night I studied dozens of biomechanical articles about pitching mechanics and pitching injuries. I must have read 30 different articles (full disclosure: if the article is from a peer-reviewed, reputable journal, I usually skip over the statistical analysis just to save time).
As I dug deeper into the literature, bits of data from several different articles began to cause a flicker of light in my subconscious mind that soon grew into a raging white hot light of epiphany.

It was late but I felt compelled to text this message to Ron.

” Ron, I have to change something. I used to think that decel inefficiencies only contributed to pain on the posterior side. While that is normally the case, I just read that the long head of the biceps is most active when resisting glenohumeral distraction during deceleration at ball release. So a guy who fails to pronate and internally rotate the shoulder as he releases the ball and fails to continue rotating around his front hip can add increased torque to the biceps-labrum complex as it resists linear distraction of the humerus. Couple that with even a slight forearm flyout (especially a late forearm flyout) which would cause a massive eccentric force applied to the distal end of the biceps, and the severe pull to both sides can cause the proximal biceps to pull the labrum away from the glenoid.   Guys with chronic anterior shoulder laxity are more susceptible to this. One EMG study showed increased proximal biceps activity in guys with anterior laxity. The moral of the story is that decel issues can also contribute to anterior shoulder pain, and the guys that claim decel is a ‘natural’ and should never be taught are probably way off base.”
Before I lose you totally, here  is a brief anatomy lesson.
The shoulder joint is popularly thought of as a ball and socket joint (like the hip joint) with the ball of the humerus inserting into the glenoid fossa (the socket). 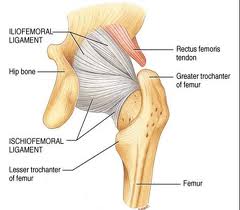 The hip joint socket is very deep and has a lot of ligamentous support, making it incredibly stable.
But the glenoid fossa is very shallow,  so the shoulder is more like a ball sitting on a saucer. 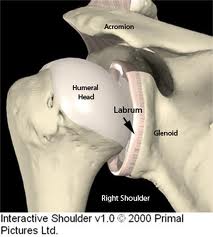 That makes the shoulder very unstable. Much of the dynamic stability in the shoulder is provided by the muscles of the rotator cuff. However, additional stability is provided by a fibrous ring of tissue called the labrum that surrounds the rim of the glenoid to give it some depth. Meanwhile, the long head of the biceps is “contiguous” with the labrum, meaning if you dissected it, the two would be difficult to tell apart.
Check out this arthroscopic view I found on the web. 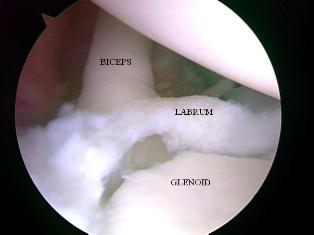 Notice how the long head of the biceps has pulled the labrum off the bone where it attaches to the glenoid.

So let’s go back to the study I was telling Ron about.

Researchers in that study performed electromyography (EMG) recording during the entire pitching motion. They found that the activity of the long head of the biceps peaked at the moment the ball is released (the beginning of deceleration). At that critical point,  the muscle fights hard to resist glenohumeral distraction in an attempt to keep the humerus seated in its shallow saucer.

A pitcher that doesn’t pronate his  forearm and internally rotate his shoulder immediately upon ball launch places a massive distraction force on the glenohumeral joint which must be resisted by the long head of the biceps. On the other end, if the elbow does not stay loose and bent, the distal biceps must fight eccentrically to resist the bang that accompanies elbow extension as the distal humerus slams into the ulna.
If the coupling of eccentric forces on both ends of the biceps is strong enough, something has to give.  And they weakest link in the chain is usually at the labrum as it inserts on the rim of the glenoid.

That my friends is called a labrum tear, and it can be devastating to a pitcher’s career.

So now I am enlightened.
I used to think that anterior shoulder pain, biceps tendonitis, anterior capsule laxity and anterior labrum tears were only due to issues on the acceleration side of the movement.
And I thought deceleration issues were only responsible for posterior shoulder and lateral elbow pain.
Now I know I need to look even more closely at the deceleration phase whenever I have students or patients with anterior shoulder pain.
I will see my two “problem students” at 5pm today. I will thank them for allowing me to expand my knowledge and for making me a better pitching instructor and physical therapist.
Then we’ll get to work on improving their decel.
At this point, if you know Ron Wolforth, you might be asking, “What was his response?”
Well, I won’t share the entire text with you regarding his answer to the decel naysayers.
I’ll leave that to him.
But I’m sure he wouldn’t mind me sharing this exerpt.
“I’ve thought that for some time…. I also believe poor decel can also contribute to medial elbow pain… But your thoughts put a ribbon around my anecdotal assumptions..”
When I read the text, I felt the warmth of validation from a trusted mentor. But then I read it again and did a double take.
“Wait! Did he say medial elbow too?”
Classic Ron Wolforth…always asking a new and better question.
“Ugh!!”
So I fired up the coffee pot and dug back into my journals looking for evidence that poor deceleration could lead to a UCL tear.
By 3:00 am, I had my answer.
But that’ll have to wait for another time.
Gotta go!
Got some patients and pitchers to see.
Categories: Blog Index Tags:  Armory pitching baseball injuries biceps tendonitis elbow injuries Labrum pitcher development pitcher training pitching injuries Shoulder injuries throwing injuries UCL
Previous
DECLINED : MLB Injuries Highlight an Epidemic in Baseball
Next
And Here’s How Poor Deceleration Can Tear Your UCL