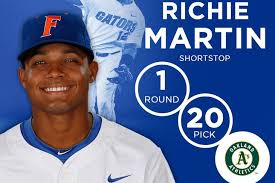 When Richie Martin was 10 years old, I helped coach the Little League All Star team he led to the Florida state championship game. Richie was a talented, quiet, and well-mannered boy who spoke in a soft child-like voice most of the time.

In the District semifinal, Richie was pitching for us and was having some trouble finding the strike zone. We had scored 3 runs in the top of the first, but in the bottom of the inning, Richie hit a guy, walked a few batters and gave up 2 runs. When the inning ended, I noticed Richie standing in the corner of the dugout facing the field with his face very close to the fence. His head was down and he was crying. It was a very tense moment.

I walked up behind him and asked, “Richie? How are you doing?”

Through his tears and breathless sobs, still facing the field, he said, “I don’t want to pitch any more, coach.”

My head began to spin as I thought, “Oh crap! This team we are playing is really good. If we’re going to have any chance of winning, Richie is going to have to pull it together.”

So I hugged him from behind, and whispered, “I understand, buddy. This is a lot to ask of a 10 year-old boy. How about if I make a deal with you? We don’t need you to pitch the whole game (we really did). We just need you to pitch some of it. In fact we really only need you to make one more pitch. You go out there next inning, and you make one pitch for us. After that, if you still don’t want to pitch, I’ll tell Coach Bullara (the head coach) to come and get you and we’ll let someone else try. OK?”

He turned around, wiped his eyes, and took a deep breath. His sobbing stopped and in the sweetest little voice he said, “Ok coach, I’ll try one pitch.”

When our half of the inning ended and we took the field, I quietly said a prayer. “Dear God, I don’t ask much of you during these games, but if you could see fit to help Richie make this first pitch a strike, I would really appreciate it.”

After a few shaky warm up pitches, the umpire signaled to resume play. The batter dug in and Richie took a deep breath.

He wound up and fired the most beautiful fastball I had ever seen.

Right down the middle of the plate!

The umpire raised his right arm and yelled, “Steeerike One!”

My eyes welled with tears as I marveled at the courage of this shy little boy who, in the face of genuine fear had made the decision to try one more pitch.

I immediately raised my hands over my head, looked up and silently thanked God.

I smiled when Richie looked into the dugout. We made eye contact, and Richie’s eyes lit up. I pointed to head coach Rob Bullara and mouthed to Richie, “You want me to send him out?”

Now grinning ear to ear, Richie shook his head and gave me a thumbs-up.

Reading his lips through my own now watery eyes, I could see him say, “I got this.”

Richie went on to pitch the rest of the game and we won it going away.

The next day we won the championship game beating White Sox 2013 second rounder (my 4th son). Tyler Danish by a score of 2-1 on the locally famous “Bucket Head Play” (I’ll tell you all about that some other time).

For now, go back and finish reading the email you started! 🙂

Categories: Uncategorized
Previous
Welcome to Pitching Coaches Anonymous
Next
How To Become a First Round Draft Pick