Yesterday was one of the coolest days of my professional career.

I’ve been in Physical Therapy practice for over 21 years, and I continue to learn more every day.

Yesterday, I had the privilege of scrubbing in and observing a UCL reconstruction done by Tampa Rays team physician, Dr. Koko Eaton. It was a joy to watch a master at work. Over the years I’ve seen lots of surgeries (labrum repairs, rotator cuff repairs, UCLs, ACLs, Total hip and knee replacements). I can’t begin to describe the depth of knowledge such experiences give me. To be able to look at an athlete and visualize everything going on under the skin is invaluable to me and to my players.

Yesterday was especially enlightening because I got a couple of questions answered that I have wondered about for years.

Here’s how it went down.

The patient was a 17 year-old righty from North Carolina. He and his parents drove 10 hours to see Dr. Eaton. After the anesthesia kicked in, Dr. Eaton made a small incision in the wrist and lifted the palmaris longus tendon from the underlying tissue. 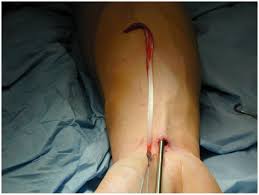 As he wrapped a stitch around it, Dr. Eaton said, “The first thing I have to do is make sure this tendon isn’t the median nerve, because their have been documented cases of surgeons mistaking the nerve for the tendon, and that would be a bad thing.

At this point,I asked Dr. Eaton if he could tell me around what point in the rehab the UCL is the most vulnerable to re-injury. See, in the knee the literature is clear that the ACL is most vulnerable at about 12 weeks post op. That’s when the tendon they harvest is the weakest. At 12 weeks the tendon has not yet completely transformed into a ligament, and if you stress it too much it can become lax and loose.I have never read about any similarities in the UCL.

“That’s a great question”, he said. “We really don’t know in the elbow. We can only extrapolate about the UCL, because the ACL information came from animal studies. Unfortunately we don’t have any animals with elbows like ours, so that information doesn’t exist.”

I did not know that.

Next Dr. Eaton went to the upper forearm, made another incision and harvested all 21 cm of the tendon. The upper end had a bit of muscle attached, so he scraped it off with scissors “like skinning a deer” (something he has never done in his life). After placing the resected  tendon in a jar, he made the incision on the inside of the elbow to begin exposing the UCL and ulnar nerve..

After cutting through some skin and fascia, and identifying and protecting a superficial nerve branch, he split the flexor carpi ulnaris muscle (FCU).

Imagine a steak with that little white piece of tissue running through it. That’s called the intramuscular septum. The septum of the FCU provides the perfect seam for splitting the muscle and separating it like a curtain. Once that muscle is split, the ulnar nerve and UCL can be seen. Dr. Eaton used a probe to pull up the ulnar nerve and move it out of harm’s way. Then he lifted the torn UCL and said, “See how fat that ligament is. This was not a one-off event. He’s been working on this tear for several years.” He laid the torn UCL back into place and proceeded.

Then Dr. Eaton drilled four small holes (2 on the ulna and 2 on the humerus) and joined them with a rooting device to create two tunnels that would be used to thread the new ligament through.

He pulled the palmaris longus tendon out of the jar and attached a few sutures to its ends. He then threaded those sutures in and out of the 2 tunnels he had created. He was happy to have harvested a tendon long enough to wrap around the joint 4 times. 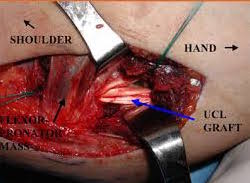 (Sorry if this picture is a little graphic)

Dr. Eaton replied, “It is. And the interesting thing is that the tendon is not the primary restraint. Those four strands are only the scaffolding or the lattice. As soon as we close the incision, scar tissue will begin to form on, around, and in between the tendons and ligaments. If we ever have to go back into this elbow later, we won’t even be able to see those tendons. All we’ll see is this big mass of scar tissue. That scar tissue is really what provides the elbow stability.”

Twenty-one years practicing PT, and that concept has escaped me. In UCL rehab, we need scar tissue. We want scar tissue. We just need to remodel it as it develops. The scar tissue provides stability.

I just got smarter.

Boom! It was a great day.