Last night was a great night at The ARMory.

We had 3 kids at the 6:00 class who were recovering from arm injuries. Two of them were in the last stages of their return to throwing and were doing well, the third, I’ll tell you about in a minute.

Most people think that The ARMory is all about developing velocity. That is partially correct. We are VERY good at velocity development. It’s actually just about the easiest thing we do. Give me a reasonably athletic guy with a burning desire to improve, and we can get that guy 5-7 mph on his fastball. A few nights ago, we saw our 105th pitcher since February of 2011 eclipse the 90 mph barrier. I’d say we are pretty good at velocity development.

But we are also masters at solving arm pain. You see, about 1/3rd of our students come to us through our physical therapy clinic. In our community, we are known as the go-to guys when you hurt you arm. I would venture to say that my son Ty and I are as knowledgeable as anyone in the country at identifying possible contributors to arm pain and then implementing strategies for eliminating that pain.

[Side Note: Ty is our Director of Player Development and has recently been named the pitching coach at his alma mater, Durant High School. His brother Ryan is the JV pitching coach, and little brother Jake is a Junior catcher and recently committed to play at The University of Tampa. This spring will be a very cool season for the Sullivan family.]  🙂

You see, when a player comes to us with an arm injury, we work hard in our physical therapy clinic to get them pain free. But once the pain is gone, the job is only half done. Our next order of business is to identify all the possible contributors to their injury, and then systematically eliminate them.

So tonight a young man (I’ll call him John) came in from Ocala, FL about 2 hours away. He was complaining of anterior/lateral shoulder pain he rated at 7/10. He couldn’t throw enough for us to get a sample for a video analysis, but his mother had recorded a video on her phone of his outing 2 weeks ago when his pain started. The video wasn’t great, but one thing I noticed was that he had a severe postural disconnect. When his front foot hit the ground, he lurched hard toward his glove side, pulling his head and torso outside of his base of support.

Ty asked the young man, “Has someone worked with you on getting on top, throwing overhand?”

“Yeah, he said. “My coaches used to call me ‘side arm sally’, so I’ve always tried to get on top. They told me I needed to create a ‘downhill plane’.

Can we all stop with this “downhill plane” idea?

My friend Perry Husband has shown in several presentations that the idea of a downhill plane being more difficult to hit is a myth.

We have created an entire generation of kids with shoulder pain by telling them how important it is to get their elbow up and get on top of the ball. Many times the player’s anatomy (i.e., the orientation of their humerus, glenoid and acromion) will not let them get their arm into a truly overhead position. So in their attempt to throw “overhand”, they lurch to the glove side, creating severe postural disconnect. This can be a dangerous maneuver and a significant contributor to arm pain and low back pain.

When I examined this young man, he reported 7/10 pain on a test called “Kennedy-Hawkins” which indicates rotator cuff impingement – often the result of abnormal biomechanics when the arm is forced into an extreme overhead position.

When when we finished at John’s video Ty said, “Postural disconnect… feed the mistake.”  And he scurried off to grab two sand bags to shove under a portable mound, putting it on about a 20-degree tilt like this: 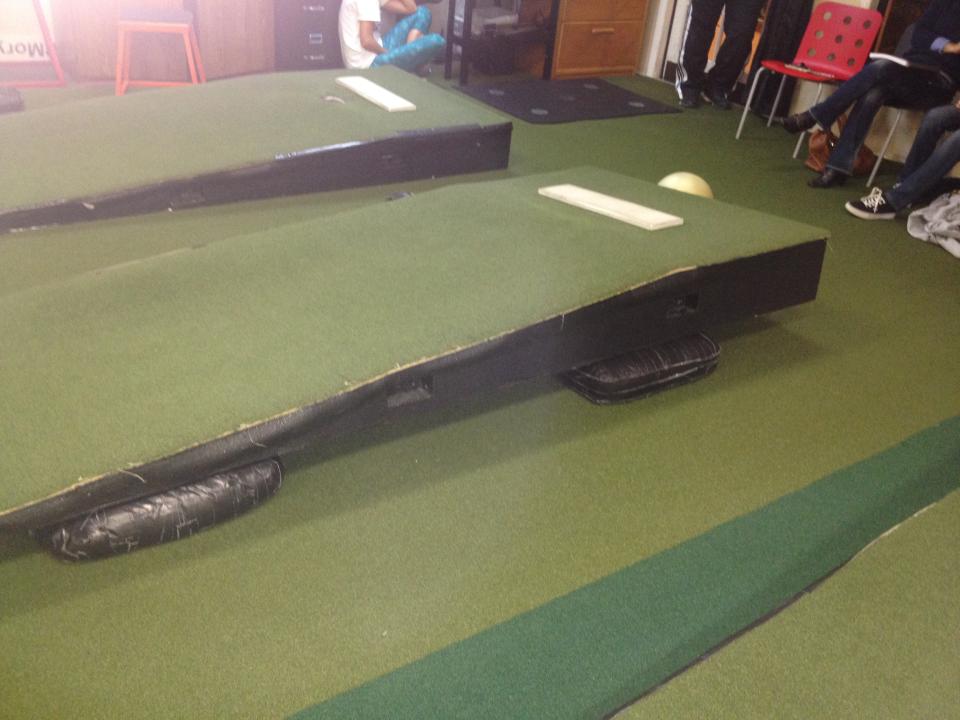 I then told John, “I want you to throw like a side arm Sally.” As I have reported before, I am not a big fan of sidearm throwing. But I knew that even though he would like he was throwing sidearm,he would actually be standing erect with a low ¾ arm slot. John climbed onto the tilted mound and made about 5 pain free pitches from that low arm slot. Everyone in the room cheered and celebrated.

Then he stepped over to level mound and made 4 pain free pitches before is disconnect returned and he reported 5/10 pain on the 5th pitch. I told him not to worry, and sent him back to the tilted mound again for 5 more pitches that did not hurt. Then it was back to the level mound. We repeated this blend 4 more times until finally he was throwing at max intensity and pain free for more than 20 pitches from the level mound. You should have seen the smile on his face.

His mother’s expression of joy and relief was priceless.

Ty’s girlfriend Jessie is in town and she was watching the session. I quietly asked her to go to YouTube and find the theme song for The Good, The Bad, and The Ugly.  When she played it I walked around the room like a western gunfighter and pretended to shoot at the arms of the guys who had been experiencing arm pain. All the while I was making shooting noises and declaring, “The arm pain assassin strikes again!”

It was a great night.

I love my job

If you’re having arm pain, we can help you.

Better yet, come to one of our Amazing Rocket Launchers Training Camps.

We’ll help you solve that arm pain for good, and you’ll be on your way to greatness.

Until next time remember,

“When you have to shoot… shoot. Don’t talk.”