Another Man Down! Jose Fernandez and Save the Cannons

This one hits close to home.

Jose is from right here in Tampa—Alonso High School.  My three sons have all played for a rival school across the county.  Until this year, we were in the same district.  I have never met Jose, but a few kids from Alonso work out at The ARMory, and Jose was a dominant pitcher in our area for three years, helping his team win two state championships.

As soon as the news of his injury broke, the obligatory disbelief and blame shifting began. I watched an interview of Marlins manager Jim Redmond who immediately deflected questions about the club’s role in the injury. According to Redmond,

“We’ve protected him. We’ve been consistent in how we’ve used him, with his workload. We’ve given him extra days. That’s a question I don’t think anybody has the answer to.”

Then I turned to the MLB network where resident expert Harold Reynolds when asked about the epidemic of injuries said, “It’s all the travel ball these kids are playing.”

Common thinking among the MLB mouthpieces and ASMI gurus is that travel ball competition, year-round pitching, overuse, and emphasis on pitching velocity are primarily at fault. But once again, I found myself screaming at my TV set,

“WHY ISN’T ANYONE TALKING ABOUT THE RIGHT THING?! YOU’RE ONLY CONSIDERING A SMALL PIECE OF THE PUZZLE!!”

I don’t know if most of you know Jose’s story, but he came to the United States as a refugee from Cuba when he was 15 years old.  According to a story by Jordan Conn in Grantland Magazine, Jose grew up walking around the island collecting rocks to use as baseballs and converting sticks into baseball bats.

He didn’t play organized baseball until he arrived in the US. Two sources close to Jose told me today that the first travel ball tournament he ever played was in Jupiter at the World Wood Bat Championships in October of his Senior year in high school. I’m sure he played some travel ball, but I don’t think it was a lot. A look at his Perfect Game profile page supports that notion. 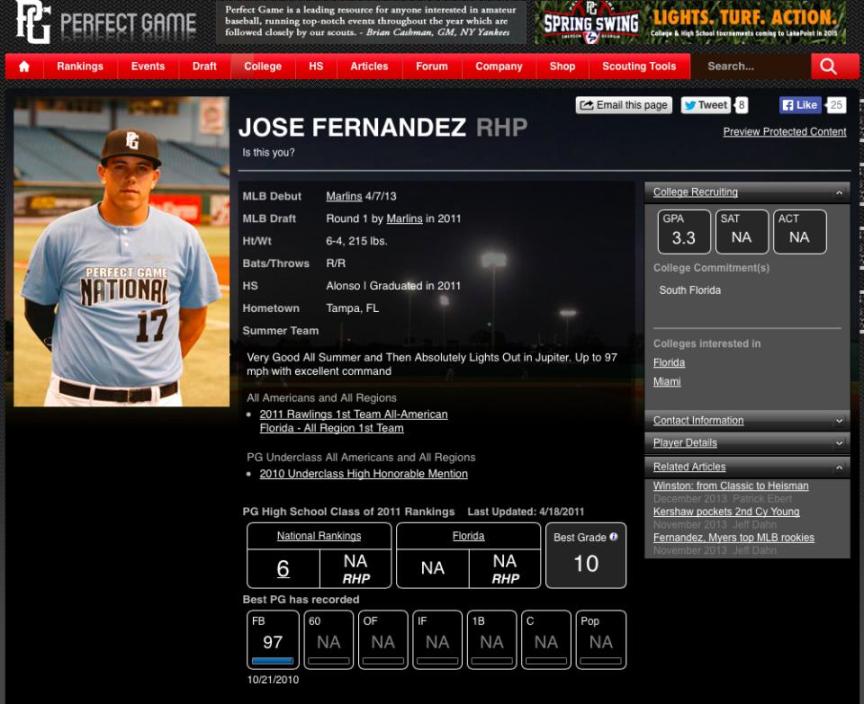 Not exactly the overused travelball gunslinger everyone points to.

And as far as year-round pitching, I feel fairly confident in stating that Jose probably took several months off from throwing when he was imprisoned after 3 separate failed attempts to escape from Cuba. I’m not sure, by I don’t think they have a robust throwing program in the Cuban prison system.

I do know Jose’s high school coach, Landy Faedo.  He’s a good guy and a great baseball coach. From what I can tell, he does not over use his pitchers. Jose pitched one game per week throughout his high school career. According to Maxpreps, Jose threw 93 innings over 16 starts, an average of 5.8 IP per outing during his senior campaign. Not an excessive workload for the average front line high school pitcher.

In the case of Jose Fernandez, a heavy workload as a youth player does not appear to be a factor.

According to traditional baseball “experts”. That leads us to only one other possibility:

But again, no one at the ASMI or in MLB are considering the mechanical and physical contributors to injury. Having never examined Jose Fernadnez for physical constraints, it would be inappropriate for me to comment definitively on the possible contributors to his injury. I will not Monday morning quarterback like so many others in this industry.

However, it would be silly to ignore the idea that the harder you throw, the more intense the stresses on your shoulder and elbow can be (notice I said, “can be”). That seems obvious to me. But not everyone that throws hard gets hurt, and many times the guys that get hurt aren’t hard throwers.

In 2012, The American Journal of Sports Medicine published a study by Urbin, Fleisig, Abebe and Dr. James Andrews of the American Sports Medicine Institute  called Associations Between Timing in the Baseball Pitch and Shoulder Kinetics, Elbow Kinetics, and Ball Speed in which the authors concluded,

“Based on these findings, it may appear that minimizing the risk of injury (ie, decreased kinetics) and maximizing performance quality (ie, increased ball speed) are incompatible with one another “

One could read that statement and say, “Aha! See the harder you throw the more likely you are to get hurt.”

But in the very next sentence, the authors had this to say,

“However, there may be an optimal balance in timing that is effective for satisfying both outcomes.”

In other words, it may be possible to find a balance between developing ability and reducing the risk of injury.

THAT IS WHERE THIS DEBATE NEEDS TO BE FOCUSED!!!

In an interview on Sirus XM radio, Dr. James Andrews reported that preliminary data in ASMI research indicates that a pitcher’s “velocity redline” for potential UCL compromise is “somewhere around 80 to 85 mph.”  I did not find this study published yet, so it’s impossible to say for sure, but I doubt if varied mechanical inefficiencies were considered.

Apparently, according to ASMI conjecture, if you stay below the 80 mph mark, your arm should remain safe and healthy, but that isn’t always the case.

In my physical therapy practice we are seeing about 3-5 Tommy John surgery patients per month. Most of them become ARMory students once they are allowed to begin throwing again. Many of them aren’t what you would consider hard throwers.

When we rehab these guys, one of the first things we do is to look at video (when available) from before they were injured. So far, ALL of the pitchers who have presented pre-surgery video have demonstrated one or more mechanical inefficiencies we would consider risky.

I am not discounting workload, overuse or enhanced velocity as important parts of the entire picture, but in my experience,

The way you throw –your mechanics– are probably the most significant variables, and your mechanics are intimately interwoven with your physical constraints.

There is another significant problem with pitching below the “velocity redline.”

While you can certainly win a lot of high school games pitching below the hitters’ batspeed, here is a picture of a guy reviewing the list of pitchers throwing below 80 mph who have gone on to pitch in college or professional baseball: 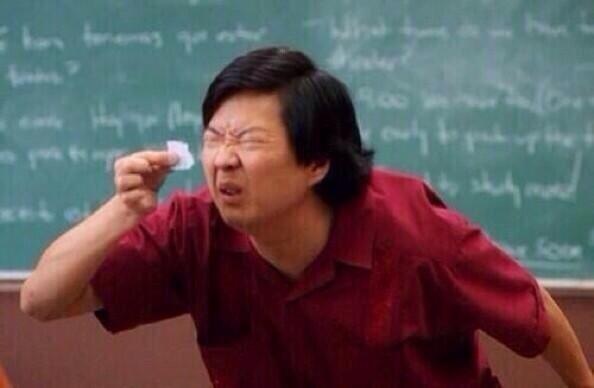 Pardon the grammar but,

AIN’T NOBODY SIGNING NO SOFT TOSSERS!

If you want to play at the next level, you have to build your ability.

But you must also do it safely.  If you want to learn to throw harder, it is critical that you identify ALL the possible movement pattern and physical constraints you have, and you MUST clean them upBEFORE you even try to improve velocity.

That leads me to my earlier assertions.

No one in the baseball establishment seems to be considering pitching movement patterns or physical constraints when analyzing the likely contributors to injury.

Maybe they just don’t have a firm understanding of what we’re talking about?

A few weeks ago, I presented a Rocket Science Live webinar called Save the Cannons: Developing Throwing Ability While Keeping Young Arms Safe and Healthy.

During the presentation I identified all the known mechanical risk factors to arm injury. The variables identified are all supported by Evidence Based Findings.

That means we didn’t just make this stuff up!

We scoured the medical literature for peer-reviewed journal articles and gathered all the available data to support our conclusions. Then we translated our findings it into layman’s terms and presented them in a comprehensive program that is easy to understand and apply.

Here’s what one mother of a 12 year old in attendance said about the eye-opening Save The Cannons Seminar, in an e-mail she titled “Knuckles to you!”

“Hey Randy I just wanted to say thanks again for doing that seminar last night. I was so very pleased to see my son’s travel ball coach there and another one of his teammate’s Dad. As a woman/Mom in this Little League baseball world, I often get looked at as a bit crazy when I stand behind the fence with the other Dads & call pitches as they are thrown & talk about my kids “acromial line” is off today or his “elbow is up to high”  & watching other boys snap & bang their poor arms & shoulders to pieces & end in that “fielders position”. They look at me like what??? Then I talk about where my son trains & what you have taught us. Still a little dear in the head lights look or I’m sure if they could, especially the older gentlemen, would kindly pat me on my head & say “that’s nice dear”.

So last night I got a “Dang girl, you do know what your talking about! This stuff is awesome!” “Whoohoo”, I said in my head! I also DO NOT claim to know it all but I do know how to ask questions & find my resources & back it up with evidence. So I am in this battle with you & your team to reach out slowly to these coaches & parents to help “SAVE THE CANNONS”! Thanks for taking care of my boys including the boys from my son’s travel ball team.  And I’m giving you knuckles for giving me this knowledge to past along and look a little less crazy in these men’s eyes. See you soon in the training lab & take care!”

That video is now available in our online store. You can get it now by clicking on the image below. 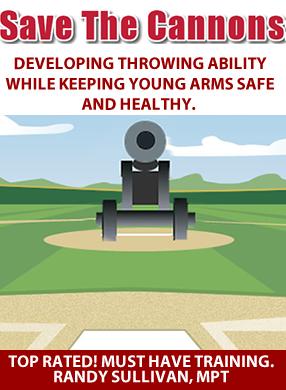 It is definitely the best work we have ever done. I know you’ll like it.

This is one you don’t want to miss.