ARMory Pitcher Ryan May Strikes Out 16 in 5 Innings! 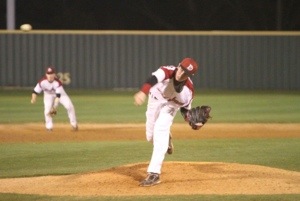 Friday night was certainly a memorable one for ARMory student Ryan May. The Baton Rouge, LA native put on one of the most incredible pitching performances I have ever heard of. In what most witnesses are calling “simply amazing”, the 6’2″ senior right hander who pitches for The Dunham School, threw a no hitter, against last year’s 3A state runner up, Loranger, allowing only one walk and 2 total base runners.

This will blow your mind!

In a 5 inning game shortened by the 10 run mercy rule, Ryan struck out 16 batters. I’m no math wiz, but that calculates to approximately ALL of the outs his team recorded…plus one (a dropped 3rd strike by the catcher that allowed a runner to reach first base).

Think about that for a moment….his entire team, save the catcher and maybe the first baseman, could have stayed in the dugout for the duration of the game. Not a single ball was put in play! In fact, Loranger manged only 2 foul balls all day. I can’t even remember a backyard whiffle ball game where something like that happened. I wouldn’t care if he was throwing to a bunch of 8 year olds, let alone last year’s state runners up. That’s a mind boggling accomplishment. Scouts on the scene said he located all of his pitches well, sat at 87-88 mph and touched 91 with his fastball.

According to one observer, “It was the most phenomenal thing I’ve ever witnessed. The entire ballpark was buzzing. The question was not if Loranger would get a hit, but if they would put a ball in play.”

I am thrilled to have had the privelage of working with Ryan who is a fine Christian young man and an excellent student. Here’s how I got to know Ryan and his family.

Ryan’s cousin, Chris May, is my son Ty’ s roommate at FIU in Miami, Fl. In August of 2012, I received a call from Ryan’s uncle, Brian May, and his Dad, Steve. The summary of the discussion was that Ryan had made his rounds through the travelball circuit, topping out around 86 mph, winning lots of games, but had not received the division 1 looks or offers, he felt he could get. They wanted to know if I thought I could help him.

My response was that if Ryan was willing to work hard and smart for the next 12-20 weeks, we could help him find 5 more mph, and that 5 mph would change his life. Both Dad and Uncle agreed and we made a plan. I would come to Baton Rouge for a 2 day camp for Ryan and a few teammates and friends. This would be a kick start to Ryan’s training program and would help him achieve what he was looking for.

The weekend after Labor Day, they flew me out to Baton Rouge and put me up in a nice hotel. The next morning we got to work. Baton Rouge strength and conditioning coach, Jay Manda, generously allowed us the use of his facility and was present and taking copious notes for the entirety of the two six hour sessions.

The minicamp involved some lecture, some demonstration, and a lot of hands on work to introduce The ARMory system.

We started with a screen for common pitcher related injuries (none were found).

A pain assessment revealed that while Ryan rarely had issues with arm pain, when and if he ever had any discomfort it was in his medial elbow and anterior shoulder.

We performed a functional movement screen to identify any physical constraints which might be inhibiting his performance. We found a hip mobility constraint and a core strength issue for which we prescribed some specific pitcher related dynamic stretching and strengthening exercises.

We then performed a video analysis which revealed a slight forearm flyout problem in his arm action, a deceleration problem, and an opportunity for improvement in more efficient use of his lower half. Decelerations, connection balls, quick picks, jump backs, turn and burns and hookems were the drills of choice to improve these inefficiencies.

Ryan and his buddies drank in every minute of instruction and maintained a high level of energy throughout.

After the camp Ryan set forth on a plan to perform his throwing drills after school 3 days per week. He long tossed twice per week, and worked out with his trainer Jay Manda 2-3 days per week, utilizing individualized work out routine prescribed for him.

In early December, I flew to Baton Rouge for a follow up 1 day training session and review. Ryan was a little frustrated that his velocity had only bumped to 87mph, but his video showed he had cleaned up a lot of the inefficiencies found in October. We tweaked a few of the drills and exercises, and I encouraged him to stay the course. Now it was about polishing the rock and building a bigger and faster motor.

He stuck to the program and his results thus far have been staggering. He has found that extra 5 mph he was looking for without sacrificing any of his command or pitchability.

Friday night was Ryan’s second outing of the high school season. The week before, he struck out 10 in 5 innings, topping out at 89 mph (that’s 26 ks in 10 innings pitched for those who are counting). If he continues on his current path, I have a feeling he’ll soon be very popular on the college baseball recruiting circuit.

Kudos to Ryan. He saw what he wanted to be and had the courage to be uncommon to get there. He deserves all the success and accolades he is about to garner.

If you’re willing to work hard and smart, and have the courage to be different, you can reach heights you never before dreamed were possible.

If you’re interested in having me out for a weekend evaluation and workshop, contact me at randy@armorypitching.com or call me at 813-701-3290.