Can You Train Spin Rate?

Last week I sent out an email called “Your Ticket To Opportunity”. The response I got was exactly as I thought it would be. 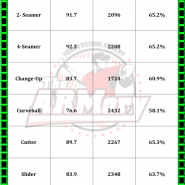 The number one question that came across my desk was:

“How do you teach spin rate?”

Well, the short answer (for now anyway) is this:

No one knows… yet.

I have spoken to Trevor Bauer (who owns a personal TrackMan), Wes Johnson, and Flint Wallace. Like me, they are all looking for ways to increase spin rate.

But the Ticket to Opportunity is a little bit inaccurate.
I knew that when I published it

When it comes to spin rate, you DON’T really want to be at or near the MLB average. To create deception and have swing and miss stuff, you actually need to be above it or below it. You want to be different from what MLB guys are used to seeing every day.

Boston Red Sox closer Koji Uehara throws an 89 mph fastball that he keeps high in the zone and blows hitters away. How does he get away with it? His spin rate is well above the MLB average. Because of his high spin rate, his fast ball doesn’t sink as much as he hitters expect.

When hitters process information, their internal computers have an expectation as to where an 89 mph fastball will be when it gets to the plate. They subconsciously organize their swing to be at that point at the right time. But because Uehara’s fastball spins at a high rate and his ball doesn’t sink, it doesn’t arrive at the plate where they expect it to be, and they swing right under it.

On the other hand, our second rounder with the White Sox, Tyler Danish, has a very low spin rate (1800). So his ball sinks like crazy. It’s different than what most guys are used to seeing, so he also gets a lot of mis-hits and swings and misses.

Then there’s approach angle (which some might refer to a arm slot).

Hitters are conditioned to expect a certain ball action from a given approach angle. Typically, a guy with a low approach angle produces spin below the MLB average (creating sink).

Ever wonder how Madison Bumgarner gets away with 90-92 mph fast balls belt high to really good hitters?

Well, he has a low approach angle, so hitters are expecting a certain degree of sink. But Bumgarner is able to manipulate his hand in a unique way to produce a spin rate right at the MLB average. Since his approach angle is lower than normal and his spin rate is higher than most guys with a similar approach angle, he misses bats.

See, since we don’t yet know how to train spin rate, what we must do is identify each guys’ spin rate on all of his pitches, and then construct a delivery and a pitch sequence plan that maximizes his effectiveness.

If your approach angle and spin rate are right at the MLB average, you need to master effective velocity and tunneling to create deception, or you are probably going to get hit hard.

The key is to be different than the norm.

Pitching is about creating real deception — not parlor trick hocus-pocus smoke and mirrors trickery like turning your back to the plate, or throwing underhand. It’s about using the available science to craft a plan of attack that will give your the best chance for success.

Does your summer training program include an assessment of your spin rate, and assistance in developing a plan to maximize its effectiveness?

It’s called The ARMory Summer Rocketeer Training Program.
It involves 5 days per week, up to 5 hours per day of hard/smart work that will launch your pitching career to a new stratosphere.

And if you hurry you can still get in. We have a few slots left for session 1 (5 weeks long) and session 2 (4 weeks long). But my advice would be to go ahead and lock in all 9 weeks. We’ll start with 8 different assessments and then we’ll get to work on an individualized plan that will make you VEEEERRY popular when you head back to school this fall.

Click here for more information and get yourself signed up before we run out of room!

Here’s that PDF again on the day in the life of a Rocketeer. And Wes Johnson’s 9 Things You Need to do This Summer Ebook

A DAY IN THE LIFE OF AN ARMORY SUMMER ROCKETEER.pdf