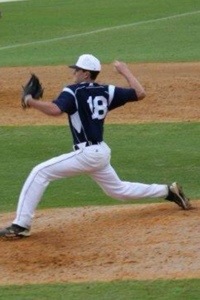 This is Dylan Barrow from Plant City, Florida.

6’2″,190 lbs. Dylan is currently sophomore at Santa Fe Community College in Gainesville, FL. He pitches at 92-94 mph with a breaking ball at 84 mph. He recently topped out at 96mph at a JUCO tournament.

Here is his story:
Dylan was a shortstop/third baseman on my son’s Durant High School baseball team and had performed well enough to earn a scholarship to NCAA Division 2 St. Leo University, in Dade City, Florida. Except for a brief failed attempt in Little League, he had never pitched in his life.

He walked into The ARMory just prior to his high school graduation in May of 2010. He was just messing around and checking things out, when he off handedly uttered, “You know, I always wanted to be a pitcher.” I responded with, “Well, let’s see what you got big guy!”

After warming up, he climbed on the mound for the first time and threw his first pitch at 85 mph. After a few more pitches, I said, “Dylan, you’re a very athletic kid and your arm action is real clean. If you want to give it a try and are willing to work hard, I think you have a chance.”

He started coming in and working out with us 2-4 times per week and initiated a twice weekly long toss program. Within 4 weeks he had touched 91 mph so I called my friend Chet Lemon of The Juice 18u travel baseball team, and said “Chet, I don’t know what you have for pitching this summer, but I’ve got a guy here who might help you. He’s only got one pitch, but it’s a good one (he hadn’t learned to throw a breaking ball yet). Chet told me to send him out. When Dylan asked me what he should do about a breaking ball I said, “Well, until you learn it, I guess you should just shake off a lot to make the hitters think you might have one.”

By late June, Dylan was the closer for the Juice and had started developing a slider. During a tournament at East Cobb, Dylan caught the eye of some pro scouts who encouraged him to forego his St Leo scholarship and to find a junior college where he could learn to be a pitcher. He did just that and has now signed a national letter of intent to play with the Florida Gators in 2013-14.

He continues to be an extremely hard worker and has made exceptional progress. He sits at 92-94mph and holds The ARMory house record for a turn and burn at 101.5 mph. He did it in his underwear (don’t ask)!

I’m sure Dylan would tell you that deciding to become a pitcher was one of the best decisions of his life.

If he keeps throwing the way he has, he may have another very tough decision in June—after the MLB draft.

Congratulations Dylan! The ARMory family is very proud of you. Keep blowing it up!