We are truly thrilled for Michael! He recently signed a National Letter of Intent to attend Belmont University.

His baseball career to this point has mirrored his life in that he has been the model for perseverance and overcoming adversity.

At the age of four, Michael was stricken with spinal meningitis and nearly lost his life. He fought through and survived but lost his hearing completely. After several cochlear implants and a great deal of training, he has learned to thrive in the face of his disability. Word to the wise: don’t talk about him from across the room–he’s a fantastic lip reader!

Michael began training at The ARMory in August of 2011 as an 81-83 mph left hander with lots of potential. I have to say he has been one of the most dedicated and hard working players we have ever seen. He attacks every workout with focus, passion and intensity. Due to his hard work, his velocity began to climb until he hit a plateau at around 86mph in March of 2012. Undaunted, he pressed on. Overcoming temporary failures and frustration, he began to break out around late August of this year. He recently topped out at 92.5 mph and is continuing to improve.

Michael is also a great student and an outstanding citizen. He is currently on pace to be the Salutatorian of his high school when he graduates next June.

For Michael to achieve what he has in the classroom and on the field in spite of his physical challenges is truly heroic. He is an inspiration to everyone around him.

The future is bright for this guy. Belmont University is getting a great player and a terrific young man.

Way to go Michael! We couldn’t be happier for you. 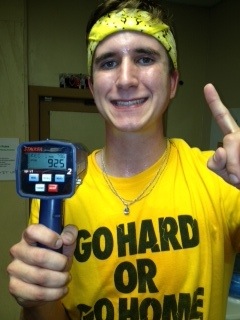 Categories: 90 MPH HOF
Previous
Dylan Barrow
Next
What are you fighting for