Man Survives Bataan Death March: Here’s What He Had to Say About It

I met a 92 year old man named George the other day.
He came into my Physical Therapy Clinic, escorted by his Granddaughter, for rehab after a Total Knee Replacement, and he is truly one of the most remarkable people I have ever encountered.
George looks every bit his age.
Wrinkled and well worn, his back is giving way to gravity and curves froward to make him hunched over when he stands and walks. He uses a cane to get around, but he has all his wits about him and frequently projects a sharp sense of humor.
As we progressed through his therapy session, I began to ask him questions about his past. He has been married for 68 years to his high school sweetheart, Alice. She developed dementia a few years back, so the grandchildren placed her in an assisted living facility, but George goes to visit her every day (he still drives).
Toward the end of his appointment, I asked him what kind of work he had done throughout his life. He said he had served for 33 years in the United States Army.  At this point, his Granddaughter chimed in, “He was a prisoner of war.”
I quickly did the math in my head and asked, “World War II? Where were you a prisoner?”
“Camp O’Donnell,” he replied.
Being a novice military history buff, I recognized the name immediately. “In the Phillipines?” I asked.
He nodded.
“Oh my goodness. Were you in the Bataan Death March?”
He nodded again and added, “It was awful. But we got through it.”
For the next half hour George went on to tell me about the battle, the surrender, and the horrific torture and neglect he and his fellow soldiers had been through. He was 19 years old when he was captured.

One of the Most Brutal Acts in History

“Only hours after the Japanese attack on Pearl Harbor on December 7, 1941, the Japanese also struck airbases in the American-held Philippines (around noon on December 8, local time). Caught by surprise, a majority of the military aircraft on the archipelago were destroyed during the Japanese air attack. Unlike in Hawaii, the Japanese followed their surprise air strike of the Philippines with a ground invasion. As the Japanese ground troops headed toward the capital, Manila, American and Filipino troops retreated on December 22, 1941 to the Bataan Peninsula, located on the western side of the large island of Luzon in the Philippines. Quickly cut off from food and other supplies by a Japanese blockade, the American and Filipino soldiers slowly used up their supplies. First they went on half rations, then third rations, then fourth rations. By April 1942, they had been holding out in the jungles of Bataan for three months and were clearly starving and suffering from diseases. There was nothing left to do but surrender. On April 9, 1942, U.S. General Edward P. King signed the surrender document, ending the Battle of Bataan. The remaining 72,000 American and Filipino soldiers were taken by the Japanese as prisoners of war (POW). Nearly immediately, the Bataan Death March began.

The goal of the march was to get the 72,000 captured American and Filipino POWs from Mariveles in the southern end of the Bataan Peninsula to Camp O’Donnell in the north. To do this, the prisoners were to be marched 55 miles from Mariveles to San Fernando, then travel by train to Capas. From Capas, the prisoners were again to march for the last eight miles to Camp O’Donnell. The prisoners were separated into groups of approximately a hundred, assigned Japanese guards, and then sent marching. It would take each group about five days to make the journey. The march would have been long and arduous for anyone, but the already starving prisoners were to endure cruel and brutal treatment throughout their long journey, which made the march deadly.

The Horrible Conditions of the Bataan Death March

Japanese soldiers believed strongly in the honor brought by fighting to the death and anyone who surrendered was considered contemptible. Thus, to the Japanese soldiers, the captured American and Filipino POWs from Bataan were unworthy of respect. To show their displeasure and disgust, the Japanese guards tortured their prisoners throughout the march. To begin with, the captured soldiers were given no water and little food. Although there were artesian wells with clean water scattered along the way, the Japanese guards shot any and all prisoners who broke rank and tried to drink from them. A few prisoners successfully scooped up some stagnant water as they walked past, but many became sick from it. The prisoners, who were starving even before their surrender, were given just a couple balls of rice during their long march. There were numerous times when local Filipino civilians tried to throw food to the marching prisoners, but the Japanese soldiers killed the civilians who tried to help. The intense heat during the march was miserable. The Japanese exacerbated the pain by making the prisoners purposely sit in the hot sun for several hours without any shade — a torture called “the sun treatment.” 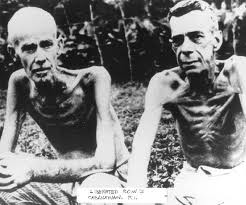 Without food and water, the prisoners were extremely weak as they marched the 63 miles in the hot sun. Many were seriously ill from malnutrition, while others had been wounded or were suffering from diseases they had picked up in the jungle. These things didn’t matter to the Japanese. If anyone seemed slow or fell behind during the march, they were either shot or bayoneted. There were Japanese “buzzard squads” who followed each group of marching prisoners, responsible for killing those that couldn’t keep up. Random brutality was common. Japanese soldiers would frequently hit prisoners with the butt of their rifle. Bayoneting was common. Beheadings were prevalent. Simple dignities 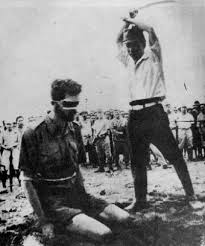 were also denied the prisoners. Not only did the Japanese not offer latrines, they offered no bathroom breaks along the long march. If a prisoner had to defecate, then they had to do it while walking.

Once the prisoners reached San Fernando, they were herded into boxcars. The Japanese shoved so many prisoners into each boxcar that there was standing room only. The heat and conditions inside caused more deaths. Upon arrival in Capas, the remaining prisoners marched another eight miles. When they reached their destination, Camp O’Donnell, it was discovered that only 54,000 of the prisoners had made it to the camp. It is estimated that about 7,000 to 10,000 died, while the rest of the missing had escaped into the jungle and joined guerrilla groups. The conditions within Camp O’Donnell were also brutal and harsh, leading to thousands more POW deaths even within their first few weeks there.”

George was a prisoner at Camp O’Donnell for 44 months and weighed 75 pounds at the time of his release. When he was liberated, he said the first American he saw was “A great big black guy! I ran up and kissed him, and his eyes were big as pancakes!”
George then told me something that really hit home.
“You know,” he said. “It was a terrible thing to endure, but it reshaped the rest of my life. I still think about it every day. It was bad, but it made me tough. Everything that happened in my life after that seemed like no big deal. Pressure situations became easy for me. Anytime anything happened that seemed like a problem, I thought about Bataan, and realized things weren’t as bad as they appeared. It changed me. It made me better.”

How’s that for perspective? My new friend,George, personifies the true definition of mental toughness.
With the spring season fast approaching, we could all use a little sharpening of our mental game.
Accordingly, for this month’s “Rocket Science Live” Seminar, we welcome the return of Dr. Tom Hanson, world-renowned Mental Game Expert, Founder and President of the Playbig Baseball Academy, and author of the bestselling books Heads Up Baseball and Play Big.

Click here to sign up and listen to a phone interview I conducted with Dr. Hanson to hear all about what he’ll cover and what has changed in his approach to the mental game.
This stuff has never been aired before
Current ARMory students can sign up  for only 2 credits using our on line class registration system.
We can never approach the kind of mental toughness demonstrated by George, but we must try.
“What you get by achieving your goals is not as important as what you become by achieving their goals.” – Henry David Thoreau

Count your blessings every day, and thank a vet for his service.
Categories: Blog Index News Tags:  Bataan Death March mental game of baseball pitching pitching velocity WWII heroes
Previous
Top 10 Reasons Your Arm Hurts
Next
I’m Blaming it All On My Kids!!!

Is Your Collegiate Summer League a Waste of Time?

Have You Ever Seen The Rain?

Back Pain in Pitchers