The Dangers of Not Assessing and Re-assesing Pitchers

Want The Perfect Arm Action? Convert a Shortstop
Ok, so there is no such thing as the “Perfect arm action”, but converted shortstops and catchers are about as close as it gets.
Many of you know Dylan Barrow’s story, but for those of you who don’t, here is the reader’s digest version.

Dylan was a mediocre shortstop in high school.  Until he walked into The ARMory about 3 weeks before graduation his senior year, he had not pitched since he was 11 years old. He had committed to a local D2 school called St. Leo University.

When Dylan said, “I’ve always wanted to be a pitcher, but I never really got the chance.”  I said, “Well lets see what you’ve got.”  He was 84-85 mph his first day, and I told him I could help him become an elite pitcher if he was willing to work at it.

Secretly, I was pretty excited. You see, I love working with guys who have always been shortstops and catchers. They usually have excellent arm action.

It’s called The Bernstein Principle. It’s a concept that was first described by Paul Nyman, and I learned it from Ron Wolforth. It is one of the scientific pillars of our approach at The ARMory.

In a nutshell the Bernstein principle is a motor learning tenet that says:

1)  The body will organize itself in accordance with the overall goal of the activity, and

2)  Mechanical inefficiencies (movement patterns that make you throw slow, wild, or with increased injury risk) do not happen in a vacuum, they require 2 factors: time and tension.

I wrote about The Bernstein Principle and a whole lot more in my first book called Developing the 90 mph Pitcher, which you can get by clicking here.

So because shortstops and catchers never have time for mechanical inefficiencies, they usually have the quintessential arm action.  That makes developing velocity and command easy, because you don’t have to take time clean up arm action and you usually don’t have to work around any pain.

If a pitcher has glaring arm action inefficiencies he must first work through them and replace them with better movement patterns before he can expect to accomplish safe, pain free velocity and command improvements.

Traditionally, if a pitching coach actually took the time to identify an arm action problem, his approach was probably to slow the pitcher’s tempo, pause at the top, establish a balance point and then begin the pitching motion. I believe slowing down an inefficient movement pattern is the exact opposite of the correct approach (reference Bernstein Principle # 2 above).

Within the first 2 weeks of enrollment we assess every pitcher in our program to look for physical constraints and mechanical inefficiencies. I know of very few (if any) pitcher development programs as committed to the assessment process as we are at The ARMory.  We re-assess every 60 days. I would love to demand reassessment every 30 days, but frankly I don’t think we’d have a very high compliance level.

If we find arm action issues like an inverted W, an elevated distal humerus, or forearm flyout, the solution is to insert a connection ball in the appropriate position, and introduce up-tempo drills to change the pattern. The idea behind the up tempo drills is to make the pitcher move more like a shortstop or a catcher. By eliminating time, we force the pitcher’s body to find the most efficient motor pattern. It usually takes about 21 days of consistent work to clean it up. Only then can the pitcher press on the throttle to maximize velocity.

But here’s the fly in the ointment.

This is a never-ending process.  We must reassess constantly.

If the pitcher stops coming in for training, or more importantly stops receiving assessments, his body and his behavior change.  Physical limitations and movement pattern constraints leak in.  Even if the pitcher dodges the bullet and avoids injury, often the unwelcome inefficiencies cause his performance to erode.

As expected, during his first ever assessment his arm action was incredible.

Here is a picture of him shortly after his first evaluation. 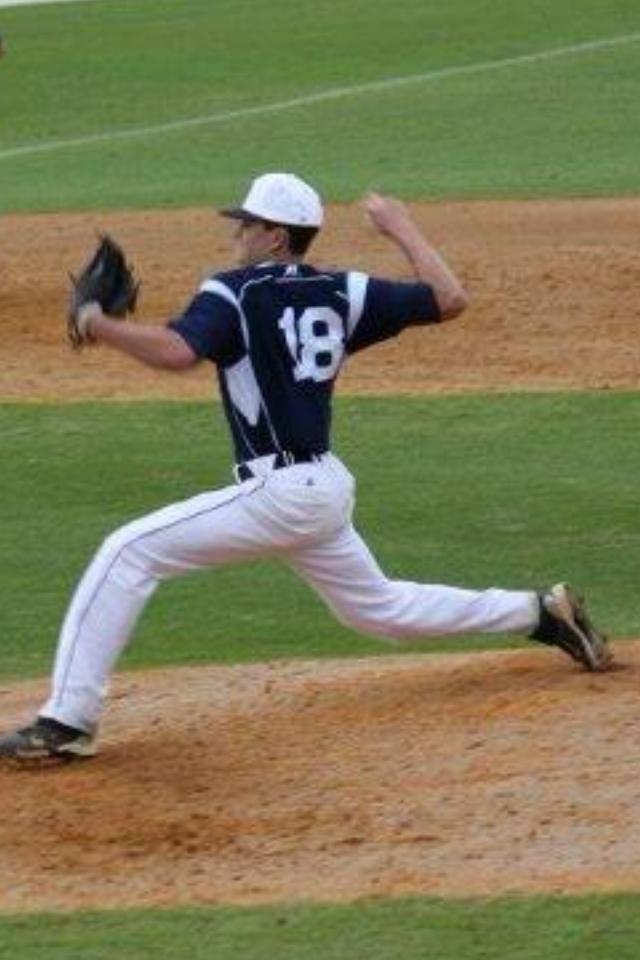 I told him I was going to have a fathead made and use this picture as a model.

Within a month of beginning his training, Dylan  was above 90 mph and I hooked him up to play for Chet Lemon’s Juice on the travel ball circuit. Pro scouts saw him and recommended he back out of his St. Leo commitment, enroll in a Junior college and learn to be a pitcher. He did just that and switched to Santa Fe Community College in Gainesville, FL.

With continued work, his velo climbed to 96 mph.

Needless to say, he was becoming very popular among the recruiting/scouting circles. Then as the regular season rolled around he stopped doing his drills and exercises.

He called me about ½  way through the season and said he was on the shelf with medial elbow pain, and his velocity had dropped to 87-88 mph.

He drove back to the ARMory and we did an assessment. He had developed a glenohumeral internal rotation deficit, a hip mobility constraint, a lead leg action inefficiency and a forearm flyout.

Here is a picture from that assessment (notice he is in street clothes. He thought he was coming home to talk to me. He didn’t know I was going to conduct a full assessment). 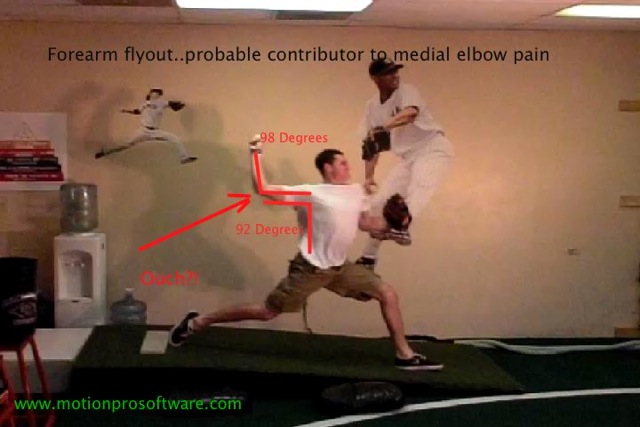 In less than a year as a pitcher only, this guy with near perfect arm action had stopped throwing like a shortstop and had begun the long arm action of a typical outfielder.

Dylan cleaned up his constraints and finished the year pain free. He is now sitting at 93-95 mph and has topped out at 97.1 mph.

So here is my point.

Your development as a pitcher is a process, not a destination.

There is no secret formula.

You can’t expect to just work hard for 4-6 weeks and suddenly be a superhuman pitching machine for the rest of your life.

Your body will not stay the same.

Your workouts must be adjusted accordingly

And the results could be disastrous.

We conduct our assessments every Tuesday night at 6 pm.

To schedule your initial or recurring assessment, click here.

The Biggest Little Word In The English Language