Tommy John? No Thanks. I’ll Throw 90 Instead 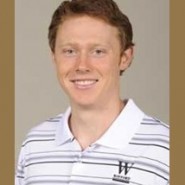 Last November, I got a call from my friend Jason Burke, the pitching coach at Wofford College, a formidable D1 program in Spartanburg, SC. Jason told me he had a pitcher he needed some help with. The pitcher’s name was Connell Anderson, a senior righty who had missed the entire fall due to elbow pain.

During the 2014 spring campaign, Connell was a starter on the Terriers’ squad, but about half way through the season his elbow started to bother him. It got worse as the year went on, and by the conference tournament, pitching on guts alone, he managed to get through only 3 innings.  Over the summer, Connell received a PRP injection, which offered no relief. He saw another orthopedist who recommended he have Tommy John surgery. In Connell’s words, “I was at a point in my career where surgery wasn’t a feasible option.”

It had gotten to the point that he couldn’t throw as single pitch without excruciating pain, so it looked like Connell’s career might be coming to an end. No pitcher wants to go out on those terms, so Jason asked if I could talk to Connell on the phone to see if I could do anything to help him.

I told him I would be happy to help.

A few hours later, Connell called and told me his story. He was coming up on his last season of collegiate baseball, and while he knew his chances of getting drafted were very slim, he hoped he could become healthy enough to at least make some sort of contribution to his team, and leave the game he loved with fond memories. But the elbow pain he was experiencing was so debilitating that he couldn’t see any hope of that happening.

I told Connell about our ARP wave therapy program. ARP wave is a patented electrical stimulation device that activates a hyper-infusion of blood flow to injured tissue and reeducates the surrounding muscles to absorb force, thereby protecting joints, tendons and ligaments. When combined with movement pattern modification and correction of physical constraints, ARP wave is an incredible tool for addressing arm pain.

On Dec 15th, Connell reported to our Rocket Launchers Training Camp and received a head-to toe physical examination and a video analysis of his throwing mechanics.

During the assessment we noticed a few significant issues. Connell had a forearm flyout, early torso rotation, premature trunk flexion, inadequate glute activation, and a lead leg disconnect. All of these can be significant contributors to medial elbow pain, but I assured Connell, that all could be corrected if he was willing to work on them daily for 3-4 weeks.

After the camp Connell trained every day for 5 days with our Director of Player Development, Ty Sullivan. He worked hard to  learn the drills he would need to make his movement pattern safe and healthy. During that time he also received 10 ARP Wave treatments.

By the time Connell left Tampa, he could throw without pain. He reported to school in January and continued his work.

In early January, Jason Burke came down to The ARMory and sat through an entire 2 day Rocket Launchers Training Camp. Ty and I had lunch and dinner with him and thoroughly enjoyed exchanging ideas and expanding our minds. We were excited to hear that Connell was doing well, that he was virtually pain free, and that it looked like he would get some significant innings in the spring.

Last Sunday night I got a call from Jason.

He left me a message that made me smile from ear to ear.

“Randy, Jason Burke here. Just wanted to give you a call and let you know that Connell threw in a game for the first time today since he came down there. He threw the ball really, really well… touched his first 90 since getting back on the mound. I thought you would enjoy hearing that, and I really appreciate all you’ve done for him and for our program. I’m really glad we got to meet, and I really look forward to getting together again soon to pick your brain some more.”

I hung up the phone and immediately called Ty, shared the news, and thanked him for all he had done for Connell.

Since we opened The ARMory in 2011, it has been my vision and dream that we would become a world leader in managing and solving  arm pain. I wanted us to be the place where pitchers with career threatening injuries could find solutions that would put them back on track to pursuing their own dreams.

I cherish the looks on the faces of the young men and women who seek our counsel when we complete our assessment and lay out the plan for their recovery. It gives them hope. And when they execute the plan, more times than not that hope becomes a reality.

That is what I wanted The ARMory to be about.

For us, that is vision is becoming more real every day, and I couldn’t be more proud of our team.

Dozens of college and professional coaches from around the country have contacted us over the past several months, and we’ve been able to help scores of pitchers just like Connell push back the cruel hands of fate and reclaim their destinies with renewed appreciation for the journey, the joys, and the struggles this beautiful game presents.

If you, or someone you know is experiencing arm pain, I want to help. Call me or at 1-866-STRIKE3 or email me at randy@armorypitching.com. Or just sign up for one of our Wednesday night evaluation sessions by clicking here.

Keep grinding buddy. Ty and I are your biggest fans. You worked hard and you deserve nothing but the best. We are honored to have been allowed to assist you. Way to go!!!

P.S. If you are a college or a high school coach, I want to let you in on a secret you already know. The team that goes the furthest on the road to Omaha, or Carey, or wherever… is the team that gets to the end of the year with the healthiest pitching staff. If one of your pitchers has arm pain, let me help you help him. Shoot me a email and some video and I’ll let you know what can be done to help your guy get back into the fight.

And don’t forget about our amazing Arm Pain Assassination Plan.

Next fall, before you start your individual workouts I will come to your school and conduct evaluations on your entire team, or just your pitching staff (your choice).

For $150 per player plus travel expenses (minimum 10 players), I’ll come in for a day and conduct a full head-to-toe physical assessment and video analysis, and I’ll give each guy a written training plan to eliminate his inefficiencies and reduce his risk of injury.

If you run a Travelball organization, I will offer the same service to you starting whenever you want.