“You Could Never Be A Big League Pitching Coach”

Monday thru Friday at 7:00 am I run a class for current, former or projected professional pitchers. Some of the students have been in the big leagues. Others are minor leaguers who are looking to advance to the show, and some are college graduates who went undrafted and are trying to hook up with independent professional teams. All have the same dream–to make it to the show.   The class was full all winter, but now that the pro season has begun, and the extended spring training pitchers have reported, the only guys remaining are rehabilitating from injury, or trying to get good enough to play Indy ball. Last Friday morning it was easy to take roll.

The class size was 1. Billy Bullock. Billy was a star at Riverview High School and The University of Florida and was chosen with the 70th overall pick by the Minnesota Twins in 2009. Here’s a picture if Billy after a 100 mph pitch at The University of Georgia in 2009. 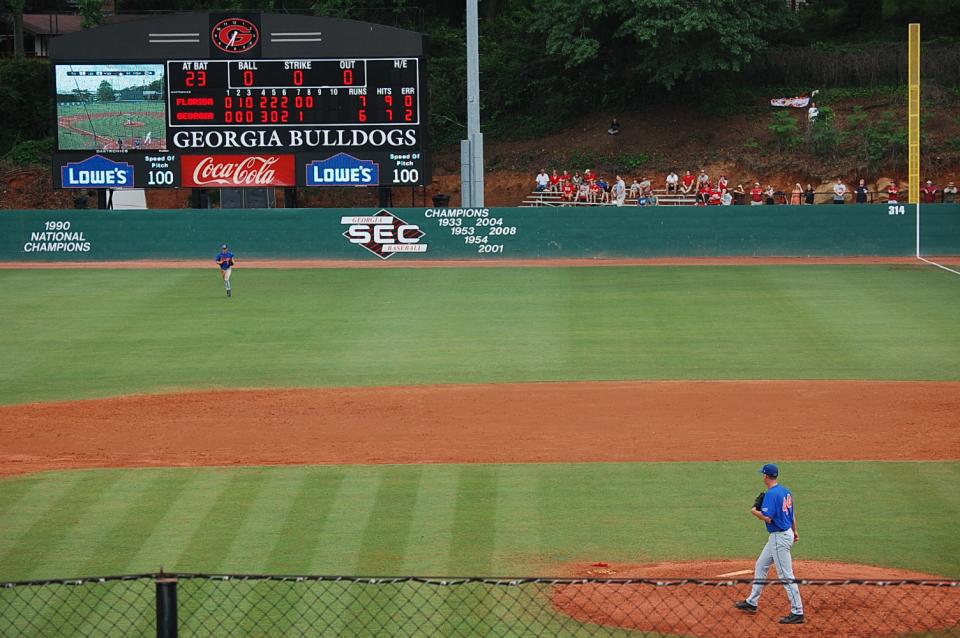 Check out the score board!

He was later traded to the Atlanta Braves and ascended to AAA level before he tore his ulnar collateral ligament in April if 2013.

Billy had surgery in August and started his rehab in our physical therapy clinic one week later Sixteen weeks after the surgery he transitioned to The ARMory for his return to throwing program.

On his first day I asked him a series of questions:

What are your goals? To get to the major leagues and be one of the best pitchers in the game. What do you consider the biggest constraint that was keeping you out of the big leagues?

When you struggled with command where did you typically miss?

Why do you think you had trouble with your command?

I don’t know. Maybe mechanical…but sometimes I just lose my focus for a few pitches. What’s the fastest you’ve ever thrown a baseball in a game?

99 mph..7 times. I don’t think the scoreboard gun at Georgia was right. Throughout your career, when you were pitching, or after pitching, where did you typically have pain? Usually in the back of my shoulder. Sometimes in the front. Your elbow never hurt?

Not really. Toward the end, before it blew out, it would get real tight, but I could still pitch. I wouldn’t call it pain.

But my Velo dropped and my command was awful.

Then we looked at some video from a bullpen session when he was healthy. I saw an acromial line, inverted W, forearm flyout, inefficient glute activation, a lead leg disconnect, a front knee that leaked almost 4 inches, and a severely inefficient decel pattern (good fielder’s position). About a week later, we conducted a head-to-toe physical assessment. We looked over his return to throwing protocol given to him by Dr. Eaton. Nothing unusual there. The first day was pretty clear. 25 throws, from 30 feet at 50% intensity. Since command had been a major issue we decided to work on it by charting every throw using a target pad with 5 different sized targets ranging from in 20 inches in diameter to 5 Inches. We would alternate arranging the targets vertically and horizontally, and every time he achieved a 70% success rate, we would change to the next smaller target size.

After a dynamic warmup, Billy began throwing. I was setting up a high speed camera to analyze his movement pattern.  Even though was only allowed to that 50% intensity, I thought we could gain some valuable information using video analysis.  As I finished setting up the camera I looked up quickly after being shocked by the familiar gutteral “thud” on the target pad when a hard thrower lets it rip.

I said, “Dang Billy. That ball’s coming out kinda hot. How much intensity do you think you’re getting.”

So I grabbed the radar gun and snuck behind him.

On his first day of return to throwing!

My heart started beating fast, I began sweating, and I stuttered when I said, “Whoa, Billy! Easy now big guy. If that’s 50%, you’re on pace to throw 170 mph.”

So now I have to radar every pitch Billy throws to make sure he “keeps it boring”. It has been my experience in rehabilitating pitchers that they have no idea how hard they’re throwing. And they are rarley even capable of throwing as slow as 50% intensity.

Think about it. If you are an 84 mph pitcher, according to protocol, you should  begin practicing at less than 50% intensity. You’d have to throw 42 mph to stay at 50%.

Well, we’ve modified and individualized the traditional plan, and we have been working on cleaning up Billy’s movement pattern DURING the return to throwing protocol using Coach Wolforth’s Solve Your Disconnection program.

After the drill work, he throws 15-30 live pitches for command and feel–all with radar gun feedback to limit the intensity.

So far, the results have been amazing.

We shot some video last week.

Lead leg leakage? Better, but still a work in progress.

In 8 days, Billy will be allowed to start ramping up the velocity, without limitation. He currently sits between 89-92mph during his actual pitches. His command now WAY better. he’s on his 3rd target size and approaching target 4.

A couple of days ago Billy was throwing off the mound.

I was standing at my perch directly behind him juggling a radar gun, a clipboard, a pencil, and a cup of coffee. After a Billy had nailed 6 targets in a row,  I said, “Hey, I was thinking maybe you could experiment with increasing your tempo a little to help keep the inverted W and forearm flyout in check.”

He sped up for he next 6 pitches. Each one was 3-4 mph slower than his current top end, and he missed badly, high to the arm side on all of them. I chimed in with, “Hey, turns out that was probably a bad idea. Just go back to what you were doing before I got in the way.”

Billy stopped in mid-pitch, turned back toward me with a look of disbelief, smiled  and said, “Dude. You could never be a big league or minor league pitching coach.”

My curiosity was peaked.

“Because you just totally admitted you were wrong. That never happens in pro ball.”

I laughed and said, “Guided discovery, baby! That’s what we’re all about.”

See I have a hard time dealing with guys who think they have it all figured out. I certainly don’t!

I do know I am a heck of a lot further down the road than I was just 5 years ago…And I’m getting better every day.

The “experts” in professional baseball also claim to have solved the mystery of the “cause” of all theses Tommy John injuries over the past several weeks. Apparently not willing to take any of the blame for over-resting and coddling young pro pitchers, they point to work load and overuse of pitcher’s when they were younger.

“They throw so much when they’re young that they’re damaged goods by the time we get them.”

Listen, I agree that in many cases the damage to a pitcher’s arm is done early in the process.  And I am not discounting workload and overuse as a contributor, but I think the gurus are giving it WAY too much weight.

There are lots of other variables that nearly EVERYONE in the baseball establishment is missing.

And tonight, at 7:00 pm EST, I’ll be sharing my evidence-based suspicions in our Monthly Rocket Science Live Seminar called Save The Cannons: Developing Throwing Ability While Keeping Young Arms Safe and Healthy

We’ll be broadcasting it as a live webinar too.

Click Here to register to attend in person or via the Webinar.

Billy Bullock will be there, and he’ll share his experience and thoughts about our revolutionary approach to return to throwing after surgery. You’ll also hear from two 20 year olds who are currently dealing with injuries that probably began when they were in Little League or High School ball.

It will be one of the most important talks I have ever given.

Hope to see you there,