And Here’s How Poor Deceleration Can Tear Your UCL

Yesterday I shared with you my research about how a poor deceleration pattern can be a significant contributor to anterior shoulder pain and can eventually lead to a labrum tear.

When I texted Coach Wolforth about my revelation, he suggested that poor decel could also contribute to medial elbow/UCL issues.

I’ve thought that for some time…. I also believe poor decel can also contribute to medial elbow pain.”

So there I went.

Down another rabbit hole looking for answers.

And as expected he was right.

The ulnar collateral ligament sits on the pinky side of the elbow, and connects the distal humerus to the proximal ulna. It consists of an anterior bundle which is cord-like and sit 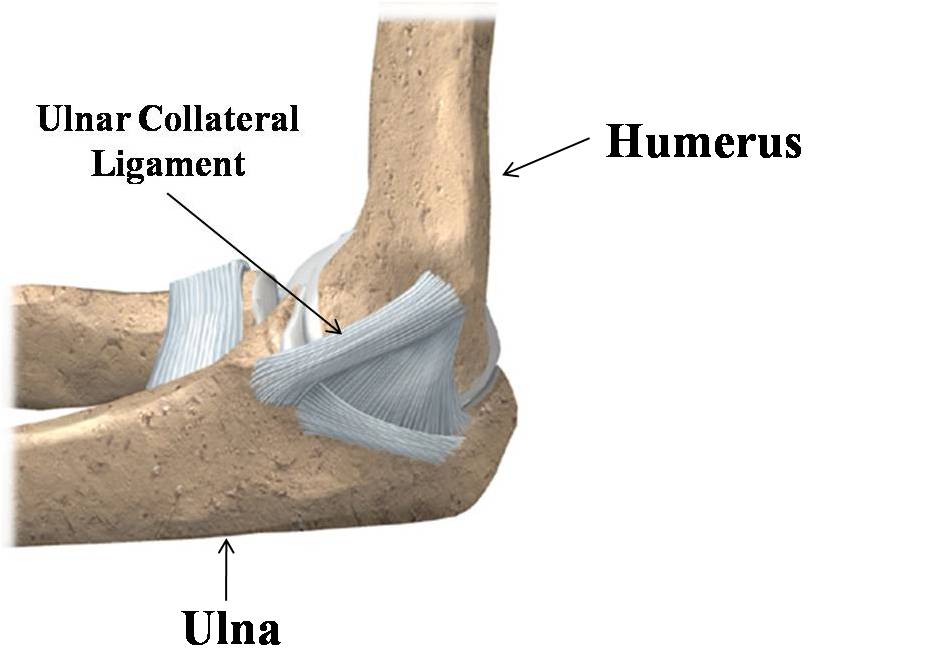 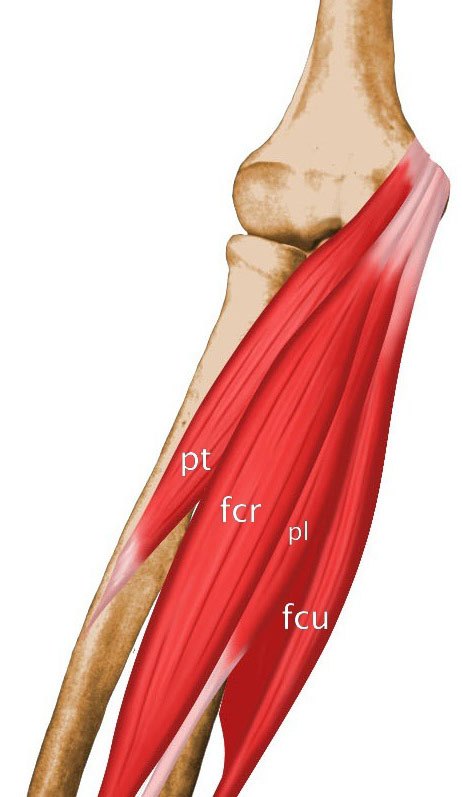 The ulnar nerve also rests in a little groove  behind the epicondyle called the cubital tunnel and can be at risk in throwing as well.

Now these anatomical drawings are great for teaching, but I have dissected a few of these on cadavers, and trust me when I say, it’s not that clean in there. All the aforementioned structures blend together and are very hard to differentiate

All I can say is God bless the surgeons who dig in there and repair things.

Now back the the Wolforth inspired question.

How can poor deceleration contribute to medial elbow pain? 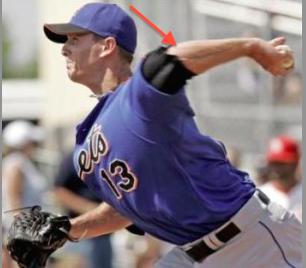 The biggest concern in the medial elbow is obviously the ulnar collateral ligament (UCL). Its only real job is to resist the massive valgusstress on the medial elbow when the arm is in full layback  position when throwing. (If you don’t ever need to throw anything in your life, you don’t need a UCL).
If you stand in the anatomomical position, a valgus stress occurs when the forearm  moves away from your body and bends the elbow toward your thumb.When the elbow is bent in the other direction, toward the pinky finger and closer to your body, that is call a varus movement. 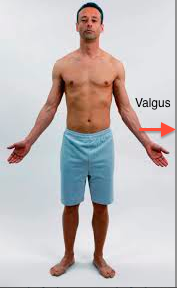 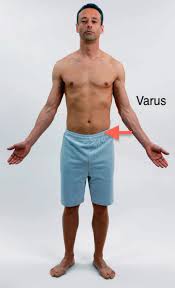 One study I read calculated that in the full lay back position during pitching, the UCL must accept 65-70 newton-meters of valgus torque. (Don’t worry about what newton-meter is just remember the numbers 65-70).
Another study reported that on a cadaver it only takes 35 newton-meters of valgus torque to rip the UCL. So it has to accept 70 Nm on every pitch, and it tears at only 35 Nm. One could conclude that the UCL should tear with every pitch!!
So why doesn’t it?
Well, it’s called attenuation, which means to dial it down so as to offset its effects. (When you turn down the volume knob on your stereo, you have “attenuated” the volume).
The stress on the UCL must be attenuated by forces that oppose the valgus stress on the elbow.
The muscles of the forearm help to attenuate the forces on the the UCL, as do the muscles of the shoulder, the scapula, the torso, the hips and the thighs, and lower legs.

In pitching, the best way to protect your UCL is to spread the work load through synergistic use of every muscle in the kinetic chain.

When you are discussing the possible contributors to UCL problems, you have to look at the variables that combine to increase valgus stress on the medial elbow. As I mentioned in a previous post, several mechanical factors are suspected to add increased valgus stress on the UCL, but three have been clearly indicted in the literature. They are: side arm throwing, early torso rotation (before weight bearing foot plant on the lead leg), and forearm flyout (the angle between the  humerus and the forearm is outside of 90 degres) at lead leg weight bearing foot plant.
That means the list of physical and mechanical contributors to medial elbow pain would include any restriction or inefficiency that can cause forearm flyout, early torso rotation, or reproduce the forces that would mimic those of a side arm thrower. Since early torso rotation and forearm flyout are acceleration issues, they dont apply to our argument today. That leaves side arm throwing.

So if we start there and work backwards, the importance of efficient deceleration in protecting the UCL begins to become more clear.

The muscles of the forearm (the pronator teres, flexor carpi ulnaris, and flexor cari radials) serve to impart a varus force on the elbow. If they are weak or if they are late to fire due to injury or poorly timed movement, the forces on the UCL at the critical moment are not adequately attenuated. How many pitchers have you seen that blow out thier UCL a few days or weeks after being diagnosed with flexor-pronator tendoinitis (Stephen Strasburg)? In fact if there is an injury or pain anywhere along the kinetic chain, critical muscular assistance could be absent or ill-timed so as to disrupt the pitcher’s timing or sequencing and leave the UCL vulnerable.

The problem with sidearm or submarine throwing

I have heard some people say that sidearm or submarine throwing is safer than traditional throwing. I completely disagree. The reason sidearm throwing can be risky is a little complicated, but I will take a stab at it.
First, unless there is significant trunk lean to the arm side, the amount of valgus stress on the elbow is obvious. 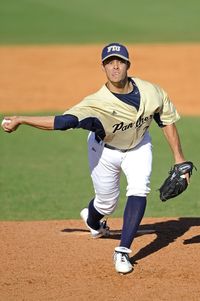 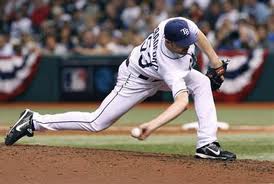 But even with trunk lean the UCL can be vulnerable because the muscles of the hips, torso, etc.. are not in the best mechanical position to maximally attenuate the forces on the elbow.
More importantly, when a sidearm or submarine pitcher chooses that pattern, his intent is usually to create movement (sink and run) to the arm side. In doing so, he must supinate his forearm. (To supinate means to turn your forearm so the palm is up. Pronation occurs when the forearm is turned so the plam is facing downward).
Supination and pronation are exactly opposite movments.
In neurology there is an improtant concept known as “The law of reciprocal inhibition.” Basically it says that to activate a group of muscles, you must inhibit the muscles that oppose the movement you are trying to actuate.  For example, if you want your biceps to bend your elbow, your triceps must be inhibited.
That’s how we’re wired.
So to supinate your forearm, you have to turn off the flexors and pronators we mentioned earlier. In doing so you eliminate their ability to impart a varus force to resist the valgus torque on the UCL.
One study reported this:
“Supination beyond 25 degrees further decreased the (flexor/pronator) muscle varus torque, suggesting the UCL would experience loads greater than the reported failure limit.”
Did you get that?

Supinating the forearm as little as 25 degrees at ball release can cause the UCL to fail!!!

Wow!!!
Does this mean that  I think no pitcher should ever throw sidearm or submarine?
NO!!
Sidearm and/or submarine pitchers can be very effective because they offer an unfamiliar look to a hitter.  We have several guys (mostly older) in our program that are sidearm/submariners. If that pattern is going to keep you in the game a little longer, or if it is going to help you sign a milliion dollar contract, then who am I to tell you no to do it? I just need to make sure you understand the risk invloved. And at the first sign of pain, we must intervene.
I will say this.
More and more I am seeing younger players (sometimes young as 12 or 13 years old) who, upon the urging of some well meaning coaches and parents, have adopted a sidearm or submarine motion.
I really think that is a bad idea.
How does this apply to our deceleration question?
Even in the traditional pitching motion, a supinated or neutral release provides the same forces on the UCL as a sidearm throw. Failure to pronate the forearm and internally rotate the shoulder will result in a supinated finish. With the flexor/pronator muscles inhibited, the necessary varus force cannot not be applied to attenuate the dangerous valgus stress on the UCL.
A supinated or neutral forearm at ball release can be due to a movement pattern inefficiency, or it can be attributable to a number of possible physical constraints.
It can also be due to an imbalance between the accelerators and decelerators. As accelerators overwhelm decelerators, the decel muscles give way like a team of guys losing a tug of war. This results in linear distraction of the glenohumeral joint and a neutral or supinated finish. This is one of the reasons we are so committed to our Weighted Ball Holds Program. It helps us create the necessary balance to protect the labrum and the UCL.
For a thorough study of all the Physical and Mechanical Contributors to Arm Pain, CLICK HERE.
There are a few other ways poor deceleration can contribute to UCL problems.
Poor thoracic mobility toward the glove side can create a block in glenohumeral internal rotation and may not allow you to move the midline away from the throwing elbow. This would create a valgus stress on the UCL as the arm cuts across  the body and finishes in a supinated or neutral position.
Also, failure to rotate around the front hip (due to physical or movement pattern constraints) can preclude adequate torso rotation which would render glenohumeral internal rotation and forearm pronation ineffective and could lead to a more neutral or supinated finish, causing increased valgus torque on the UCL.
So there you have it.

An inefficient deceleration pattern can place the UCL at risk for injury.

I must confess that for the past year or two, I have been a little lax about insisting our guys drill their deceleration patterns to mastery. I always thought decel issues only caused pain on the posterior side, and posterior shoulder and lateral elbow pain has been very easy to correct. Very few catastrophic injuries occur on the posterior side.

But now that I know what I know about the importance of proper deceleration to protect the labrum and the UCL, all ARMory pitchers and training staff will be redoubling our efforts to create world class decelerators. “And that’s all I have to say about that.” -Forest Gump- Randy Sullivan, MPT
CEO, The ARMory Power Pitching Academy.
P.S. If you want to clean up you deceleration pattern or any other physical or mechanical inefficiencies that might be putting you at risk or inhibiting yor performance click here and check out our Engineering The Superhuman Pitching Machine series of books and DVDs. You’ll find a leading edge medical and motor learning approach to developing ability safely.
P.P.S. Our Summer Weekend Rocket Launchers Training Camps are filling up fast, and I am an unashamed capitalist. That means our prices will be going up soon. Hurry and lock in your spot while the price is as low as it will ever be. Each camp is limited to 20 attendees, so don’t get left holding the bag! For more info and to see all the planned weekend events, CLICK HERE.
Categories: Blog Index Tags:  arm pain elbow injuries pitcher training pitching injuries the ARMory Tommy john injuries UCL
Previous
Poor Deceleration Can Tear Your Labrum and Your UCL
Next
Save the Cannons: Developing Throwing Ability While Keeping young Arms Safe and Healthy