Said goodbye to a new friend yesterday. Allow me to introduce you to DJ Mitchell. 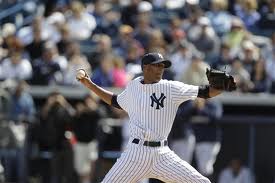 He has been training at The ARMory for the last 4 weeks…..every day….at 7:00 am….
DJ is a 26 year old professional baseball player.
A right handed pitcher who played in the big leagues for the New York Yankees, he was named the Yankees 2011 minor league pitcher of the year and made his major league debut in June of 2012.
In July of that same year, he was traded for this guy. 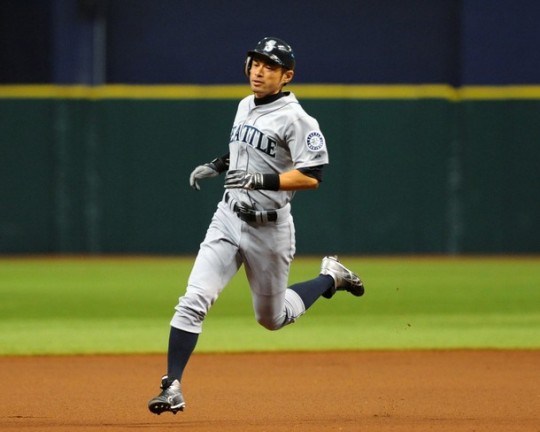 Through a series of administrative occurrences, DJ became a free agent, and in 2013 he signed with the New York Mets, spending the season in AAA Las Vegas.
The thin air and hard desert turf were not kind to DJ. He scuffled through the 2013 before being released. By his account, during the 2013 season, he began to tinker with his mechanics, but could never find the consistency that had been the hallmark of his career. His velocity began to dip, and he lost his command. The season ended with DJ posting “some very crooked numbers” (his words), and the Mets did not re-sign him.
For the first time in his career, DJ entered the 2014 spring without a club, but he wasn’t too worried. In early February, he traveled to Lakeland, FL for a tryout with the Detroit Tigers. To his surprise, despite taking time off in the offseason, his velocity had not returned. During the tryout this athletic, explosive former rising star, who normally pitched between 90 and 94 mph, struggled to reach 84 mph. TheTigers weren’t interested.
It just so happens that DJ’s agent, Mike Milchin, is one of my best friends. Mike and DJ had come into the ARMory about 2 years earlier and watched one of our training sessions. After the failed tryout DJ was understandably frustrated and confused. Where had his velo gone? Would he be able to get it back?
Mike Milchin was unphased.
With the calm of a frog waiting for a fly, he simply observed the situation and formulated a plan. “Hey DJ, remember that place called The ARMory, we went to a couple of years ago? I think Randy Sullivan can help get your velo back.”
DJ agreed to give it a shot and called me.
For Mike to even think of sending such a high caliber player to work with me was highly unusual. For DJ to agree to do it required a high dose of humility and trust.
The common thinking in MLB circles is that “Once you lose your velocity, you never get it back.”
Mike knew better.
So did I.
My understanding the concepts of motor learning and myelination of neuromuscular patterns told me that the appropriate infrastructure of circuitry was already there. We just needed to turn all the right switches back on .
This was going to  be fun.
DJ met me at the ARMory 5-7 days per week at 7:00 am. Sometimes we were alone. Sometimes there were a few other college and pro guys present.
But DJ was ALWAYS there.
He just stayed the same and kept working.
DJ checked into an Extended Stay Hotel about 10 minutes from The ARMory. He showed up every day at 7:00 am and trained for 2-3 hours. When the session was over, he grabbed some breakfast at a nearby eatery and headed back to his room.  He practiced his new drills and did a “boat load” of weighted ball holds in his room. He watched a lot of basketball games and waited in his room for the next training session. His hotel was across the street from the movie theater, so every once in a while he walked over and took in  a movie.
“I really don’t mind being alone”,  he said. “I actually kind of like it.
Just like we do with every client, we started with a head-to-toe assessment to check for physical, functional and mechanical constraints.

It is our policy to screen for ALL known risk factors before allowing any pitcher to begin pursuing velocity enhancement.

The physical evaluation revealed a few significant opportunities in shoulder mobility, thoracic mobility, and hip mobility. The video analysis showed a lead leg disconnection, and DJ was surprised to see how little he engaged his glutes and legs in his delivery. He also crossed the acromial line with his arm as he pulled the ball out of his glove. This delay made his arm late to final connection (when the front foot hits the ground), and he began to subconsciously drift forward with his trunk in an effort to buy time for his arm to catch up.
In an attempt to improve his command, DJ had made the common mistake of slowing his tempo, which rendered his deceleration phase virtually non-existent.
On his first day of training, since he did not report experiencing any pain and he had been thowing for about 6 weeks prior, we took a baseline radar gun reading.  DJ grunted and snorted his way to a top speed of 84.2 mph.

We started with deceleration.

We nearly always start with deceleration
Adding energy to a poor deceleration pattern can be a dangerous proposition, so I knew we had to make some improvements there first.
One of my favorite moments occured about a week into the training. As DJ began to find a very efficient deceleration pattern, I asked him a question I use all the time, “How did that feel?”

DJ responded with “It feels like I’m throwing a cloud.”

I love that. Never heard it described like that.
We began a program of drills to teach the him the feel for glute activation and lead leg connection. The drills were done with a connection ball under his arm to work on the acromial line issue. The entire program was executed within the principles of guided discovery. I rarely gave him verbal cues, just assigned the appropriate corrective drills and found creative ways to blend them together and make them more challenging as he improved.

Very soon, it became obvious that he was totally invested in the process. I knew he was getting it.

Within 2 weeks his deceleration pattern had improved, and the acromial line issue was completely gone. His lead leg and glute engagement became much more efficient, and each day we spent about an hour rebuilding an explosive pitcher specific power motor using the workouts in Engineering The Superhuman Pitching Machine, Vol 1.
Back in the hotel room, DJ studied effective velocity by watching my video presentation called Pitcher’s Kevlar: Bulletproof Your Pitch Selection
To pass the time he worked on carving away his physical constraints using the drills and exercises in Engineering The Superhuman Pitching Machine, Vol 3
DJ was excited, motivated,  and completely engaged during every session.
We start every workout with a 10-15 minute dynamic warmup. This is when I usually survey every player for any reports of pain. One day, when I  asked DJ how he felt, he stopped warming up and said, “I can’t believe how good my arm feels. I’ve thrown every day, more than I ever have in my life, and I not even sore at all.”
My response was, “I’m thrilled for you DJ, but I’m not surprised. When you do it right, it’s not supposed to hurt to throw. And the new recovery program you learned was designed to help you be ready with your best stuff every day.”
Once he learned all the appropriate drills, we scripted his workouts to mimic the 5 day rotation he would experience when he returned to the big leagues.
Velo day, decel/recovery day, blend day, blend day, prep day, Velo day, recovery day
We checked velo 2 x per week. separated by 3- 4 days each time.
After about 2 weeks of work  the velocity began to climb….fast.
84.2 turned into 88, then 91, then the day before he left he hit 92 mph.
That was a gain of almost 8 mph in only 4 weeks, and he’s still gaining.
The credit all goes to DJ.
For a pitcher of his caliber to humble himself, eliminate any outside distractions, and singularly focus on his goal of getting back into professional baseball is uncommon.
I was honored to be able to work with him.

DJ is currently enroute to Bridgeport, CT to play for the Bridgeport Blue Fish, and independent league team.

When I asked him what he thought about going to Bridgeport, he said, as long as they have a few good places to eat….It’ll be fun.”
Classic DJ.
In a nutshell, this is why DJ Mitchell will make it back to the big leagues:
Zero needs…unlimited desire.
Follow DJ’s progress on twitter: @BPTBluefish.
Every time he pitches and dominates, I hope to see a retweet party.
Thursday he was the only guy working out. I spent part of the morning searching Youtube for a walk out song to fit his new nickname.
Here’s what we came up with.
Check it out. 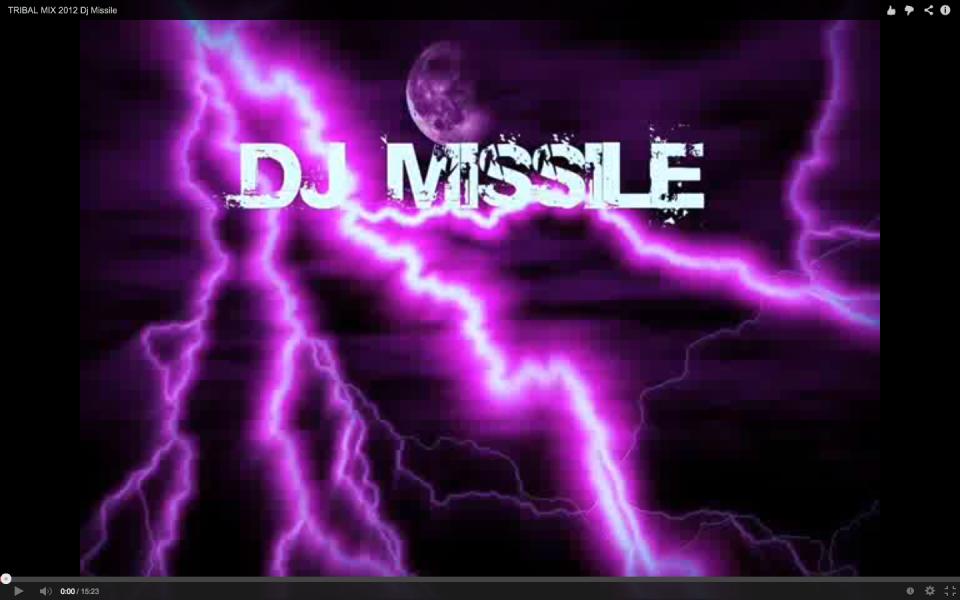 On Friday morning, DJ had to leave the workout about 30 minutes early to get on the road. He shook our hands and hugged every guy in the room.
Another one of our pro guys, former Riverview HS and Florida Gator great Billy Bullock (AAA with the Atlanta–recovering from Tommy John surgery) summed it up perfectly.  After the door had closed, Billy looked a 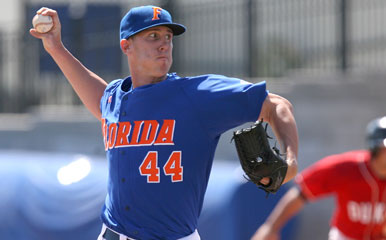