Eric Binder, Trevor Bauer, Jonathan Massey and Ron Wolforth are onto something huge at The Texas Baseball Ranch. Today I was introduced to the box squat torque, the walking box squat torque and eccentric strengthening of the gluts with one legged plyobox step downs. What they are really tapping into is a phenomenon in rehab known as proprioceptive neuromuscular education. In this article I will try to explain the concept and show how it applies to learning a critical part of the pitching delivery.

Proprioception: This is the term for the subconscious feedback our brains receive from receptors imbedded in every tendon, ligament, muscle and joint capsule in the body. These receptors send continuous information to the brain about the location, orientation, length and tension of each of the aforementioned structures. The brain then processes this feedback and produces muscle contractions to stabilize joints and create movements. It all happens continuously and repeatedly every nanosecond. I use this image to explain proprioception to my patients: Imagine a guy in the cab of a giant backhoe, but the shovel or claw piece is digging on the other side of a giant wall so the operator can’t see it. He would need a guy on a radio on the other side of the wall guiding him with verbal feedback. “A little left–now down–now a little right…..” Proprioception is that guy on the radio. Without it our brain has no idea which muscle contractions to produce to actuate the necessary movement.

In my physical therapy practice, we frequently use eccentric contractions to retrain proprioception after injury or surgery. When the brain senses damage to a body part, it often protects it by shutting down the feedback loop and ceasing all nerve input to the muscles surrounding the site of injury. As a result, movement of the part is nearly impossible. For example, immediately after knee surgery the patient often experiences an inability to move the operative limb. To reactivate the limb, we use a technique called eccentric neuromuscular reeducation. With the patient lying on his back, we help him lift the leg off the bed then have him attempt to activate the quads to control the leg as it is slowly lowered. The eccentric muscle contraction often reeducates the proprioceptive feedback loop, the quads begin to awaken and the patient is eventually able to lift the leg again.

The length tension curve: Every skeletal muscle has an optimal length at which it is capable of producing the maximum amount of force as depicted in the following graph. 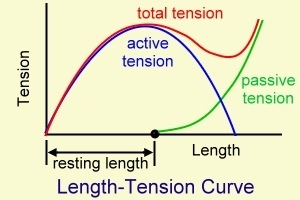 The blue bell shaped curve is the one of interest to us. At the peak of the curve, the muscle is at the perfect length for producing force.

For a demonstration of this concept, consider your biceps muscle. Bend you elbow fully so your hand touches your shoulder. From this position, in which the two ends of the muscle are approximated, the biceps is at its shortest and in a very weak position. Now straighten your elbow all the way. At this point, the biceps is at its longest and is also in a very weak position. Somewhere between those two extremes, the biceps reaches the perfect length and is at at its strongest.

At the 2012 Ultimate Pitching Coach’s Conference, Binder and Bauer discussed and demonstrated the importance of loading the back hip while moving toward the plate to produce the explosive energy necessary to deliver the ball at maximum velocity. The duo spoke about tilting the center of gravity rearward and downward to activate the gluts, thereby producing the a pre stretch and subsequent explosive back hip extension and internal rotation necessary to propel the lower half down the mound. Coach Wolforth echoed this concept but emphasized the need to introduce the depth of glut activation gradually over time so the athlete can maintain synchronization of movement. I would submit that for the pitcher to be able to perform this gluteal loading maneuver effectively, he must have a keen subconscious kinesthetic feel for the exact location of his center of gravity and the length/tension status of his gluts. When the gluteus maximus reaches the peak of the blue bell curve on the length/tension graph, it must switch from eccentric to concentric mode to ballistically extend the back hip. At the exact same moment, the gluteus medius and the muscles of inner thigh must fire rapidly to rotate the hip and pelvis toward the hitter. Meanwhile the torso must remain rotated approximately 80-120 degrees in the opposite direction, creating the elastic energy we know as torque. Bauer, who in my opinion is one of the most “in tune with his body” guys I know, describes the feeling of back hip loading as “an impulse” and says it indicates to him exactly when it’s time for his hips to fire. I believe his impulse is an awareness that his gluteus maximum has reached it’s optimum point in the length tension curve. Subconscious awareness of the exact perfect moment to fire the back hip is only possible through proprioceptive feedback.

So that’s the science. The next question is “How do you train it?”

Of course the Ranch guys have begun experimenting with ways to train eccentric control and proprioceptive awareness of the back hip. Here’s a short video of Massey performing an eccentric load using a unilateral plyobox maneuver
http://www.youtube.com/watch?v=bTdx9VP3tbY.

Wolforth suggests this exercise as the first in a progression in which the athlete gradually increases the depth of the squat and then begins to introduce an angular component to replicate the pitcher’s movement pattern.

Then, to blend the feeling into an actual throw, they perform a drill called the walking box squat torque. Here’s a ranch guy performing that drill.

Since each athlete’s peak gluteal length/tension point is different, the addition of a radar recorded throw from the box squat position provides an objective reflection of the the pitcher’s ability to find the perfect depth and timing of glut activation for maximum energy creation.

To summarize, the idea is to train the athlete’s proprioceptive feel and to strengthen the gluts using the eccentrically controlled unilateral plyobox exercise. Then it is blended in with a walking box squat torque. Add the objective feedback of the radar gun and let the Bernstein principle take over. The pitcher will gradually develop the ability to subconsciously feel the perfect rhythm and timing of the glut firing sequence.

This is a brilliant finding, and one we will implement at The ARMory immediately! Kudos to Ron, Jill, Trevor, Eric, Michael, and all the guys who contribute to the progressive think tank that is The Texas Baseball Ranch.

The Dangers Of Training Corruption