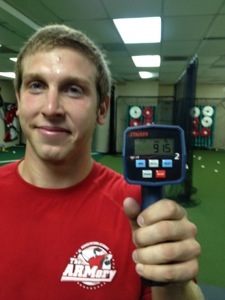 Meet Dominic Monda another member of our 90 mph Hall of Fame. Dom is a sophomore Lefty at Hillsborough Community College in Tampa, FL. 5’10”. 185lbs. He came to us last May with a chronically sore posterior shoulder topping out at 76 mph. He enrolled in our summer program and worked out Monday through Thursday from 8:00 am to 10:30 am for 16 weeks.

Even though he lives over an hour from our facility, he never missed. He long tossed on the weekends. We started with deceleration and implemented weighted ball holds to try to create balance between his accelerators and decelerators. After each workout, Dom would go to work at his construction job, carrying a 2 pound weighted ball with him. He said he did up to 100 holds per day.

By mid summer his pain was gone and his velocity began to climb. He continued to improve his movement pattern and in September he topped out at 91.5 mph.

Although his demeanor is quiet and subdued, he is a fierce, power packed, fast-twitch athlete who works out like Tazmanian Devil. He holds the second highest ARMory turn and burn at 100.2mph.

Dom just signed to play next year at Florida International University. We expect big things from him. If hard work matters–and I’m pretty sure it does–Dom will find a way to make it happen.