Is It Possible To Be Injury Proof?

Five years ago my candy apple red Ford Ranger pick up truck with over 200,000 miles was totaled when I was rear ended by a 21 year-old in a Mitsubishi Box truck chocked full of cargo. I wasn’t hurt, but my truck was rammed into the back of a jacked up Ford F150, and it crumbled up like an accordian.

When the dust settled, I immediately called my friends at Brandon Ford for a replacement.

They love me at Brandon Ford.

Over the past 20 years I have purchased 9 Ford Trucks from them, and now

I asked them to find me another truck ASAP. They called me later that afternoon and told me they had found what I needed. I told them I would be there to pick it up right away. That’s how I shop for cars.

When I arrived at the lot to 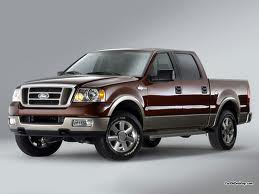 claim my newest used truck, my salesman Tee Carrington, said he had no smaller trucks on the lot, but he had this sweet F150 King Ranch Version. It was 8 years old, but it had belonged to a farmer who had barely driven it.

It was more truck than I was accustomed to, but the deal was too good to pass up, so I took the leap and bought it.

I really liked the leather seats, and every time I looked at that rockin

’ logo on the tailgate, it made me feel….uncommon

The second day after I got the my new truck home, I was on the  way to work, backing out of the driveway, when I realized I had forgotten my phone in the house. I got out of the truck and headed through the garage to get it.

Unfortunately, I forgot to put the vehicle in park.

By the time I noticed, the truck was rolling down the driveway with the driver’s door wide open, and it was headed right toward the basketball goal, which was anchored in 3 feet of concrete.

When I realized my dilemma, I freaked out a little and raced back to the driver’s side of the vehicle. But for some reason instead of simply jumping into the truck and stepping on the brake, I opted to try to stop the truck manually using the door jam and the open door for leverage.

It did not work.

The sound of the metal basketball pole ripping the hinges off the door of my brand new King Ranch F-150 was nauseating.

It was not one of my finer moments.

I really liked that truck, and I was really proud of it.

It was the nicest vehicle I had ever owned.

If you had asked me to, I could have created dozens of scenarios in which I wrecked my new truck.

This was not one of them.

I would have never imagined that on the second day of ownership, I would one day forget to put it in park and rip the hinges off the door.

That’s the way it is with pitching.

Everyone likes to try to predict who will and who will not get injured. And whenever a high profile pitcher gets injured, they start the blame game.

During the most recent rash of high profile Tommy John injuries, the MLB gurus immediately started blaming youth baseball, claiming that every one of them had been overused as a kid (patently untrue).

Let me ask you something.

When an NFL running back blows out an ACL, do they go back and blame his Pop Warner coach? (Credit to Flint Wallace for that idea–classic Flint– common sense Texas logic).

Another thing that sticks in my craw is when a pitching coach or instructor makes a claim that they can guarantee a pitcher will never get hurt.

Any pitcher could be hurt at anytime.

At The ARMory, we have over 600 students on our rolls.

Not all of them come in as often as others, but I know every one of them. We keep charts on each one documenting every evaluation and progress check, just like a medical record.

If you asked me to, I could go through every single chart and create a dozen hypothetical scenarios where each one of them could end up injured.

Two of our highest profile students are Tyler Danish and Austin Bergner.

Tyler was Perfect Game’s 2013 right-handed pitcher of the year and was the second round draft pick of The Chicago White Sox in the 2013 draft.  His stuff is filthy, and before he was called up to high A-ball this year he was sporting the lowest ERA of any pitcher in all of minor league baseball. He’s the cover picture for our Engineering The Superhuman Pitching Machine series.

Over 500 pages and 3.5 hours of video describing, in easy to apply terms, the entire process that has seen 80 pitchers eclipse the 90 mph fastball threshold.

Austin Bergner is a 2016 right-hander who is currently Perfect Game’s number one overall prospect in his class. His fastball has been recorded as high as 95 mph, and he has not yet started his junior year in high school. I have coached Austin since he was 9 years old, and he is totally dedicated to our entire process.

Both guys are great pitchers, and neither has ever had an injury of significance. They both come in for assessments at least every 60 days just to make sure no possible risk factors are leaking in (Tyler recently flew home during the all-star break, and the first thing he wanted to do was his recurring evaluation).

TD and AB have been the epitome of health and durability over the years. We have kept a close eye on any movement pattern or physical changes that have arisen, and each guy has always made the necessary adjustments.

But can I guarantee you that neither guy will ever be injured?

Listen, I think both of these guys are going to have long, productive careers. I truly believe they will both be major leaguers eventually, and anything I can do along the way to assist in their development will be an honor and a privilege.

But if you asked me to, I could come up with a dozen scenarios under which either one of them could be injured. And most of them would be due to factors completely beyond our control.

From 1931 to 1937, Dizzy Dean was considered one of the best pitchers in baseball. His fastball was among the most powerful in the game, and he is the last National League pitcher to win 30 games in a season. While pitching in the 1937 All Star game, he was nailed in the foot by a line drive off the bat of Earl Averill. When told that his big toe was fractured, Dean reportedly said, “Fractured, hell, the damn thing is broken.”

Coming back too soon from the injury, Dean changed his pitching motion to avoid landing hard on his damaged front foot. As a result, he hurt his arm and lost his devastating fastball.

If Dizzy Dean were playing today, the gurus would be blaming his little league or travel ball coach for overusing him. But could anyone have predicted the scenario that ultimately led to his demise?

The only way you can be guaranteed to never hurt your arm while pitching is to never pitch at all.

The only safe pitch count is zero.

We’ll never be able to eliminate injuries from pitching, but through research and experience, we can identify all of the known variables that might put a player at risk, and then we can target our training to suppress them as much as possible.

Understanding all the known possible contributors to injury helps us establish a training plan that definitely improves our odds.

But there is no guarantee.

I can guarantee you that any pitcher who comes to me with arm pain will receive a thorough and immediate evaluation. We will do everything in our power to help them become pain free. If I believe they have a significant injury, I will refer them to the finest doctors I know. And in the event that they do require rehab or surgical intervention, we will be there, every step of the way, to walk them through the entire recovery process.

We will not blame.

We will not judge.

We will not fret.

We will only help them get better.